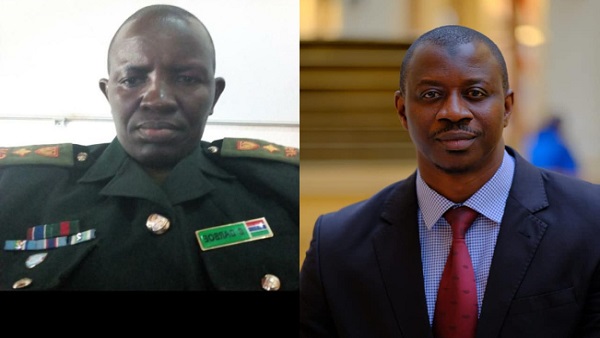 Following the publication yesterday of an interview in The Standard in which former army general now political party leader Lamin Bojang addressed issues in the Gambia Armed Forces, serving soldier Lt Col Bunja Darboe has taken to his Facebook page to react.

He wrote: “I read Lamin Bojang’s statement in The Standard newspaper where he mentioned that ex-convicts were reinstated into the army while Musa Savage and Sillah Kujabi were removed on flimsy excuses. I wonder why the so-called general is making comparison with issues that are not linked. My reinstatement and others into the army has no link with the removal of Savage and Sillah Kujabi. Those who removed them must have their reasons for removing that you and I are not privy to know.

“I am an ex-convict for the only crime to remove [sic] an entrenched dictator who happened to be your godfather and who promoted you to the enviable rank of a general. You could never have become a general in any other army other than the Gambian army under Yahya Jammeh. You do not have the discipline, the military knowledge and aptitude to be a general. You became a general by circumstances rather than competence.

“I may be an ex-convict to you today but some years ago precisely 1996, I was a secretary to an Officer Cadet Selection Board that selected you together with many other officer cadets including Yaya Darboe whom you are today saying that he should not have been reinstated because he is an ex-convict. By the time you were selected as a fresh officer cadet, I was already a lieutenant…

Those who reinstated me and others were well-informed that we are patriotic and professional officers whose only crime was an attempt to remove a ruthless dictator who had suppressed the Gambian people by inflicting on them fear of assassination, imprisonment and forced disappearances and exile. You the so-called general had condoned all these excesses by continuing to work with Yahya Jammeh until he promoted you to rank of general. You are one of the dangerous enablers of Yahya Jammeh while he continued to kill and maim Gambians. You do not have the moral upright to contest for presidency in this country. You will be worse than Yahya Jammeh and all his enablers combined because you are still very arrogant and pompous. My advice to you is keep your mouth shut because you have nothing to tell or give to the Gambians.

“…How can you accuse General Masanneh Kinteh of tribalism when you very well know that the only person who has manifested tribalism in The Gambia in both words and actions is your godfather, Yahya Jammeh whom you have diligently served. Why did you not talk at that time about tribalism? You only have the guts to talk about it now just to gain political points. That shows that you’re a political novice.”