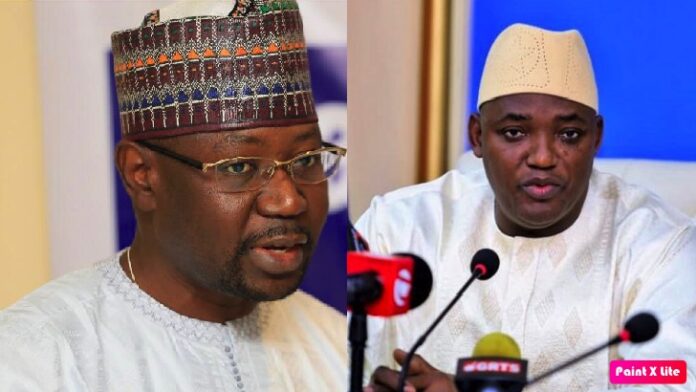 The leader of the Gambia Moral Congress has warned President Adama Barrow not to crush himself by attempting to perpetuate his stay in power whilst lamenting that the draft constitution promulgation bill had been designed to fail.

Mai Fatty said the rejection of the draft bill was an outcome of executive complicity, political convenience, personal interests among other parochial considerations.

Addressing a press conference at the GMC National Secretariat on Thursday, Mai contended that a ‘forensic evaluation’ of the rejection of the draft constitution promulgation bill would show that the desire of the PPP and NRP not to endanger President Barrow’s political ambitions, APRC’s quest to protect its legacy [1997 Constitution] and the choice by the justice ministry of a wrong section of the law to push the bill all precipitated its failure.

“September 22nd 2020 will go down in the history of The Gambia as a day of ‘The Great Betrayal’. This was the day when a group of politicians, acting as known proxies for and on behalf of an ill-guided leadership, attempted to kill our collective national aspiration for a fresh start,” he rued.

To Mai, the jettisoning of the bill undermines the hopes and aspirations of the majority of Gambians, who in 2016, voted against Jammeh to end the continuation of the state of affairs at the time. This, he added, is an indication that the electorate voted for systemic change that would embrace the values of reform programs, strengthening of government institutions and enthronement of the principles of inclusive democracy.

He argued that the desire for Gambians to see an end to self-perpetuating rule by ensuring a term limit, reform of the country’s institutions, reduction of the powers of the executive in parliament’s favour, consolidation of judicial independence through enhanced remuneration package have all be torpedoed by narrow-minded considerations.

Mai took a swipe at the Justice ministry for not putting its house in order before taking the bill to the House.

“The role of the Attorney General’s Chambers and Ministry of Justice is most shocking. The ministry relied on the wrong provision of the Constitution they knew would automatically lead to the rejection of the bill,” he contended.

“This is the surest evidence of the government defeating its own bill in parliament. They presented the bill pursuant to Section 226 of the Constitution, a provision that has nothing to do with presenting a draft Constitution Promulgation Bill before the National Assembly. It is not the section for a referendum on a new constitution.”

Mai said the GMC holds the government ‘directly’ responsible for the rejection of the ‘so-called’ bill.

“We conclude that there was no sincerity on the part of the government with regards to the entire reform program. We assert that the reform Mandate upon which the Coalition emerged victorious at the polls in December 2016 has been torpedoed, and in its place the rejected agenda of the consolidation of the status quo ante has been granted new accelerated engines. This is the Great Betrayal that history will talk about for eternity,” he emphasised.

Mai resolved that GMC shall defend the collective national interests by ensuring the draft constitution thrives. The draft, he added, is not dead and will never die.

He called on Gambians and friends of the country to support the country’s democratization process which, he lamented, has been derailed.

“We did not end a system of brutal dictatorship in lieu of a benevolent dictatorship. The priority of The Gambia today is the reform and strengthening of institutions of State, reform of the governance architecture and building of a strong economy for inclusive prosperity. These priorities have been put at the back-burner. Self-perpetuation and development projects, intended to hoodwink the public so as to secure the sole goal of perpetuation, are on course,” explained Mai.

See our next edition for more on the presser.