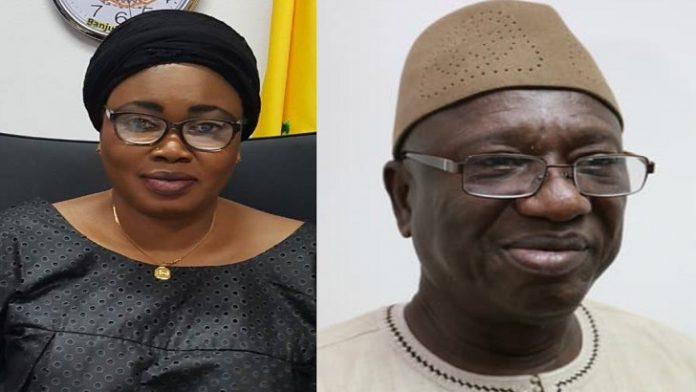 Councillors and members of the Banjul City Council led by Mayor Rohey Lowe yesterday confronted Works minister Bai Lamin Jobe alleging that they were snubbed over details of the Banjul roads reconstruction.

The BCC officials further contended that as the elected executives of the municipality, the council deserves to at least know something about the US$37 million roads project.

In a short but charged explanation, Mayor Lowe told the minister who was touring the project as part of a nationwide inspection of road projects that it was both “unimaginable” and “flabbergasting” that the “BCC knows virtually nothing” about the project apart from the “mere invitation” to attend its launching.

“I have been inundated with questions from both my councillors and the general public and media as to the nature of the project but I cannot find any answers because I simply don’t know any aspect of the project.

I have, since coming to office, been knocking on doors about this project, for example, having meetings with the contractor Hadim Gai and the minister himself over this project. But here we are, we don’t even know anything about the project as I have not even seen the project document.

As the BCC, the direct representatives of the people of Banjul, we deserve to know at least the details about the project such as how much money is involved or which streets are to be paved etc,” the Mayor complained.

She demanded that the BCC be involved or at least shown the project documents, arguing that even though it may be a central government project, the beneficiaries are Banjulians.

The mayor was supported by the councilors who wanted to know which streets would be paved or built from the more than 30 kilometre road project.

In response, Works Minister Jobe said he did not expect to be publicly confronted like that arguing that the mayor could have gone to his office to raise these issues.

He however subsequently assured the BCC councilors and officials that they would be able to access any information about the project during the normal stakeholders meeting on updates on the project.

He explained that the roads project was not publicly tendered because the Gambia Government has no money for this project and it is being pre-financed by the contractor Gai Enterprise.

“Once the government conceived the desire to build the roads, the technical papers were prepared and the government then looked for a contractor who will pre-finance the works to the right specifications, observed by an international consultant, and be paid five years later. Gai Enterprise agreed to prefinance the works.

This is the true story of this project. It is different from the normal projects which go to tender because the employer already has the money, ” the minister said.