‘Media was the most oppressed professional body under Jammeh’ 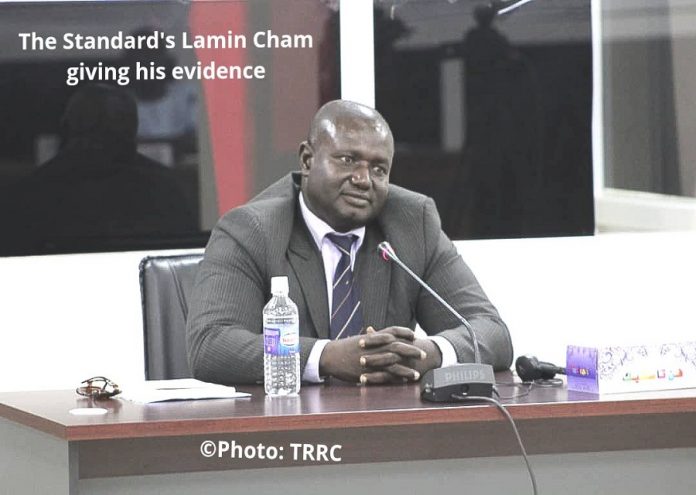 Lamin Cham, a veteran journalist, former BBC correspondent and currently Editor-in-Chief of Standard Newspaper, has said that the Gambian media suffered the most among all professional bodies under Yahya Jammeh’s tyranny.

Testifying at the beginning of the 6th session of the TRRC yesterday, Mr Cham said as communication agents, journalists were targeted by Jammeh who did not want dissenting views heard or his action and decision challenged by the public.

”Jammeh knew that the only way to do this was to harass the journalists, many of whom had to flee from possible death, arrest and torture,” Cham said.

Mr Cham then gave a detailed account of how he was tortured by a gang led by former state guards Tumbul Tamba and Musa Jammeh, before being paraded before an NIA panel comprising Mohammed Hydara and Nuru Secka.

Cham added that the atrocities against journalists were state-sanctioned and had a harmful effect on the profession.

The former Daily Observer and GRTS journalist concluded by warning that unless the remaining restrictions on the media are totally removed from our law books, the risk remains that one day someone will use them against journalists.

Meanwhile the secretary general of the GPU Saikou Jammeh appeared to give an overview of the catalogue of harassments suffered by the journalists in the country.

Throughout this week, more journalists will appear to tell their stories.