My dear brother and sister, get married, or die fasting 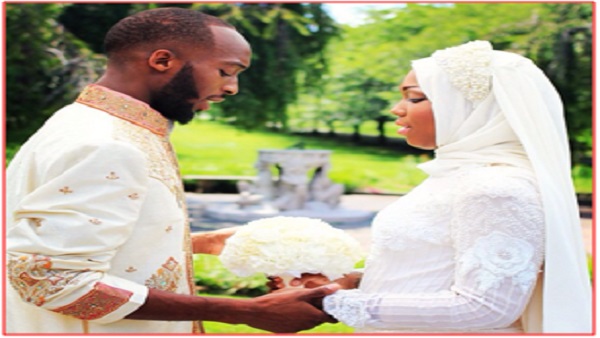 It was narrated that ‘Abdullah Ibn Mas’ud said that:“The Messenger of Allah SWT, Muhammad SAW said: ‘Whoever among you can afford to get married, let him do so, and whoever cannot afford it (i.e. marriage) should fast, for it will be a restraint for him.”’ [Sunan an-Nasa’i].

What is the definition of marriage in Islam?Marriage is a legal and formally binding social contract, either verbally or written, between a biological man and a biological woman, to live together as husband and wife.Both husband and wife should accept the conditions of the contract of marriage. The man or husband should pay a dowry (or the bride price). The wali or guardian (or his representative) of the woman should give away the bride (or wife) in marriage. Marriage has prescriptive rules which have been mentioned in the Qur’an and Sunnah. “And among His (Allah’s) signs is this, that He created for you mates from among yourselves, that you may dwell in peace and tranquility with them, and He (Allah) has put love and mercy between your hearts”.[Surah Ar-Rum: Verse 21]. In order to know all of this and much more, be prepared and get married.

Islam has clearly outlined the purpose and numerous benefits of marriage.Marriage is a very strong tradition of Prophet Muhammad SAW. It is narrated in the authentic books of Imams Bukhari and Muslim that the Prophet Muhammad SAW said: “A woman is married for four reasons: for her wealth, for her lineage, for her beauty, or for her religion. Marry the one who is best in the religion and character, and you will prosper.”By getting married, a person can with the help of Allah SWT overcome the evil related to illegal sexual intercourse.Marriage helps both men and women to lower their gaze and guard their chastity.

Islam encourages believers to get married, even if they are poor, for marriage will enrich them and protect them from immorality.Marriage ensures that married couples remain faithful to each other for the rest of their married lives. Islam asserts that marriage is theonly legitimate way to satisfy one’s sexual desires.In other words and for clear emphasis, marriage is compulsory in Islam before engaging in any sexual activity.Sex outside of marriage in Islam is therefore a major sin. Some of the benefits of marriage among many other benefits include to have children, bring them up according to the Muslim faith, ensure the increase innumbers of the Muslim Ummah (i.e. nation), and assure the continuity of human generations. Marriage actually completes half of one’s religion.

Anas ibn Malik reported that the Messenger of Allah, peace and blessings be upon him, said: “Whoever Allah provides with a righteous wife, Allah has assisted him in half of his religion. Let him fear Allah regarding the second half.”[Al-Mu’jam al-Awsat? 992].Imam Al-Bayhaqi narrated in Shu’ab al-Eemaan from al-Raqaashi: “When a person gets married he has completed half of his religion, so let him fear Allah with regard to the other half.” The above is also squarely applicable to women. A woman who Allah provides with a righteous husband, has been assisted in half of her religion, so let her fear Allah regarding the other half. In order to fully understand the purpose of marriage and to fully reap the huge and numerous benefits, blessingsand rewards of marriage, get married.

Early marriage or early extra-marital intercourse? Polygamy or sodomy? A girl should not be married before the age of 18 years they say. This spoils her education, career ambitions and so forth. Any family caught giving away their daughter (or son?) before the age of 18 will be dealt with according to law, and this is indeed part of our laws in The Gambia. Okay, agreed. Then why teach young boys and girls at school who are below 18 years old sex education and family life education? Remember they are not yet married, so why teach them family life education? What are you preparing them for? What business do they have being taught and learning at that age about how to use condoms and contraceptives? Remember, kindergarten pupils cannot read university level books. Knowledge and action should be taught and implemented according to class and levels. This is a known and accepted teaching, learning and practice methodology in pedagogy as well as andragogy.

At that critical adolescent age of less than 18 years old, when testosterone and estrogen levels are high up there and above normal, exposing teenagers to sex education (without them being married) will definitely create more curiosity to further discover sexuality and to lust the wrong way, ultimately leading [to] illegal sexual intercourse. To rub more salt to the injury, everywhere you turn, you see lewdness, nudity and licentious behaviour. Young men and women are dressed half naked, and no one says or should say anything for it is their right. What about our right to speak the truth? Of course we shall equally ensure the application of the corresponding responsibility not to insult or hurt anyone in our truth-telling processes, and this we must accept shall be a very hard feat to accomplish.

Everything is hyper-sexualised. Movies, songs, books portray and relay explicit sexual contents. Women are objectivised. Extreme pornography is now an acceptable commonplace. Every other teenager owns a personal smart phone, and if not all, most store and share pornographic contents through these intelligent phones. Why are we not also criminalising child and teenage pregnancy? I am not talking about rape here please. In Islam, the rapist should be killed. What we are talking about here are deliberate incidences where young girls and boys engage in premarital sexual intercourse and end up with unwanted pregnancies, which are the causes for many abortions and baby dumping. If law shall not criminalise “early extra-marital intercourse”, then law should allow young men and women below 18 years of age who want to get married, to get married. Marriage indeed protects them from illegal sexual intercourse and its numerous adverse consequences. If the age of consent can be 16 or 14 years old, then the age for marital consent can be the same (with parental guidance of course). To further rub even some more salt to an un-healing injury, they are now blatantly calling for sodomy and in our country?! I will not dwell much on sodomy for Concerned Citizens have sufficiently elaborated on the topic and the venerableimams have delivered powerful sermons regarding the unholy subjectmatter of the actions of the damned and destroyed people of Prophet Lut. My question is what happened to polygamy? Our God-given right to marry wives? In Islam, Muslim men are allowed to marry up to four wives, as long as they can fulfill the conditions of polygamy. They legalise sodomy and criminalise polygamy. We criminalise sodomy and legalise polygamy? Why should they boldly brandish the illegal ways, and we cowardly cower our heads in shame to proudly practice the permissible and highly encouraged practice of polygamy for Muslims who can engage in such? Why should we leave our laws and accept their laws? Come now! To do that will be very foolish! There are so many blessings and benefits of polygamy in Islam. If you really want to know about them and live the true experience of polygamy, then get married. And get married again.

Fasting and marriage, how are the two related?
Marriage is not only about satisfying lust. Such satisfaction is only temporary and once fulfilled, marriage may lose its value. Marriage is about other deeper human experiences. Tranquility, stability, affection, mercy and so forth. These are more real, deeper, and longlasting.Strong sexual desires are extinguished with fasting. This is what is explained in the opening hadith of the first paragraph of this essay. Get married. If you cannot get married, then observe fasting. Fasting diminishes or extinguishes sexual desire. The fasting person is more consumed with hunger and thirst, therefore sexual desires are significantly reduced. Also, before a fasting person breaks his or her fast, he or she craves to eat many things and in large quantities. But once he or she breaks his fast, then he or she finds out that all appetite has been lost and he or she can only eat few morsels of food. In other words, most times we have strong desires for something and we almost cannot stop thinking about it. But once we have had it, it will not be as exciting anymore and we might not even be that interested in it anymore. The hadith on fasting and marriage is indeed very true and beautiful. It teaches us the reality that what we craving is not truly worth the hype and the sin. Illegal sexual desiresand their pursuit is not worth one’s frustration, impatience or most importantly the anger and wrath of Allah, The Most High. Sexual desire in itself lasts for a very short period. Eventually, if one is patient and perseverant, marriage becomes a sweet and fulfilling reality. Allah SWT and His Prophet SAW have taught us what brings deeper, more complete and meaningful happiness, as well as eternal rewards and endless rewards. With all said, the fact however still remains, my dear brother Mohammed and sister Zainab, it is either you get married the halal (or permissible) Muslim way, or simply die fasting. And Allah is the source of all strength.JazakumulAhu khairan.

Muharram and the fasting of Ashura

We seek refuge with Allah SWT from the accursed Satan. In The Name of Allah SWT, The Most Merciful, The Most Beneficent. Allah SWT...
Read more
Sound Standard

To our oustazes and ndongo daaras, continue to teach and learn, may Allah SWT bless your pen, ink and paper

With Mohammed Hassan Loum “Read! In the Name of your Lord, Who has created (all that exists), who Has created man from a clot (a...
Read more
Sound Standard

With Mohammed Hassan Loum My mobile phone rang a little after 3:00 am at night. The caller never called me during such odd hours, so...
Read more
- Advertisment -