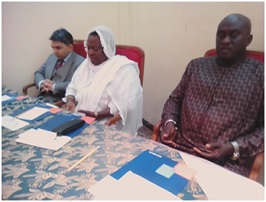 International Institute for Democracy and Electoral Assistance, IDEA, recently orgainsed a programme to sensitise lawmakers on constitutional building process.
The two-day convergence brought together over 40 parliamentarians.
International IDEA is an intergovernmental organisation that works to support and strengthen democratic institutions and processes around the world, in a bid to develop sustainable, effective and legitimate democracies.

The organisation has regional offices in Wider Europe (Netherlands), Latin America and the Caribbean (Chile), Asia and the Pacific (Australia) and Africa and West Asia (Ethiopia) with its headquarters in Stockholm, Sweden.
According to the organisers, the sensitisation came under an MOU signed between International IDEA and the National Assembly in April, 2019 to build the capacity of Gambian parliamentarians.

Speaker of the National Assembly, Mariam Jack Denton, said the sensitisation will “significantly” help law makers in the execution of their functions.
“This sensitisation will seek to enhance the involvement of the ongoing constitutional building process through galvanising parliamentary debate on the process and its expected outcome,” she said.
She thanked International IDEA for accepting to partner with the National Assembly to ensure the smooth building of the democratic society in The Gambia.
Speaker Denton said the objective of any constitution is to establish a framework of good governance, strong institutions and to determine who exercises the powers and authority of the state.

“As we move towards strengthening the democratic gains under the leadership of President Barrow Gambians have been very active in the consultation and engagement in deciding on the terms and provisions of the new constitution,” she added.
Momodou Sise, clerk of the National Assembly, said the National Assembly as an important organ of the state, has “a very crucial role to play” in promoting and protecting democracy and good governance.

Two out of the 6 new Covid-19 cases registered yesterday are Senegalese members of the Ecomig contingent. The two soldiers, ages 47 and 46 respectively,...
Read more
News

By Tabora Bojang A leader of the Citizens' Alliance party, Dr Ismaila Ceesay, has called on the inspector general of the police to immediately drop...
Read more
News

July 3, 2020
Two out of the 6 new Covid-19 cases registered yesterday are Senegalese members of the Ecomig contingent. The two soldiers, ages 47 and 46 respectively,...