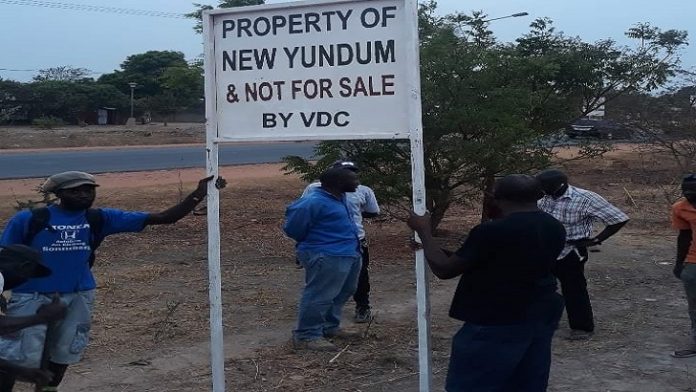 The community of New Yundum, led by the Village Development Committee has called on government to return the community reserved lands on the Coastal Road opposite the Yarambamba Housing Estate, some parts of which have been allocated to members of the National Assembly.

A large chunk of the said land measuring 1000/500 meters was allocated to civil servants and lawmakers last year. They were reportedly served a 6-months notice to fence the plots or have them returned.

But in a lengthy statement issued to the media yesterday, the community of New Yundum said they are “displeased” over government’s decision to allocate their land to lawmakers for residential purposes.

“We demand that the authorities make available all documents detailing how the land was acquired, the ownership of the remaining part of the land to be transferred to the community, the said area to be henceforth addressed as New Yundum and not Old Yundum for there is no other settlement that can claim ownership of the lands except the rightful owners,” the community said in the statement.

The Community also demand that all work activities on the land be halted until all pending investigations are exhausted and that all land matters to be treated with a greater sense of urgency and prudence in order to avert delayed of justice “for justice delayed is justice denied”.

They further demanded that“all community reserve lands not to be used by anyone individual or for any residential purposes just for personal benefits or gains and the state to stop giving plots of lands for free to underserving people, agencies or institutions like that of members of the National assembly which is and cannot be justified under any condition.”
The New Yundum community said the area in question was a sacred territory used by the ancestral Kings of Yundum before being turned into farm lands by its indigenes who were farming there until recently when “unnatural activities started to unfold at the area.

“We would like to draw the attention of the general public and by extension the government of The Gambia in particular the Ministry of Lands and the members of the National Assembly of our utmost dismay, disappointment and frustration about the ‘unlawful allocations of plots belonging to the community of New Yundum to government officials and in particular, the members of the National Assembly,” the community said in their statement.

The community further argued: “We truly find this regrettable and utterly unease of how insensitive our own public officials more so National Assembly members could venture into such act of robbing the very people they are to serve genuinely. We wonder where we will end up as a country when the apex law making body is bent on such a ‘dubious activity without considering the plight of the very people who elected them into office.In fact, it will be worthy to note that the land in question is under investigation by the community’s lawyer which was previously provoked by activities of Real Estate agents/companies. The issue was also raised to the Minister of Communication who was representing the Lands Minister at the National Assembly but to our surprise and dismay the same people connived and butchered the land amongst themselves for residential purposes whilst abandoning the poor community to the mercy of severe uncertainty,” the community added.
The community said the Ministry of Lands had initially claimed that the entire area was under court eviction to one Sulayman Gaye and Njogu Cham but they later realised that not the whole area was affected.

“Our VDC was asked to write a letter of request for an official transfer of the remaining area to the community whilst the legal process takes course on the rest. To our dismay, after several months now, not a single response is heard from the ministry even after we sent several follow up letters. And we are made to further realised that the said area is now being addressed as Old Yundum/Airport Estate instead of its customary name Yarambamba or New Yundum. This, we assume is all done to change ownership to a community that will not claim the area,” the community stressed.