Ning nyewlou banta… (when the fish is finish…) 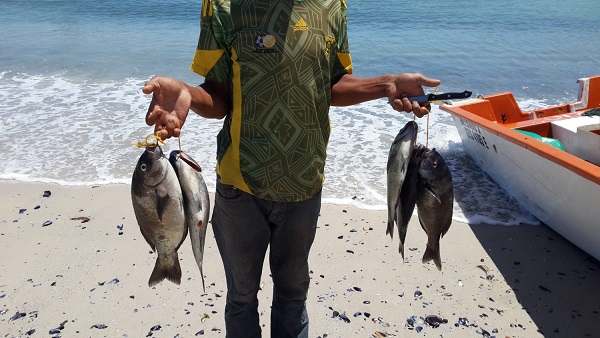 Globally, millions of people depend on fisheries for their livelihoods. In 2002, an estimated 35 million people were directly engaged in fishing on full-time basis receiving 90% of their livelihood from the sector (FAO, 2002). By 2014, 56.6 million people were engaged in the fisheries (FAO, 2016). Majority of these fishers (95%) are found in developing world; Asia hosts 85% while Africa is host to 10% of them. In 2014, the FAO estimated that there were 4.6 million fishing vessels, 75% of them in Asia and 15% in Africa. Environmentalists, subsistence and artisanal fishing communities have been concerned with the depletion of fish in many communities. And this fear is very well founded. In 2013, “the share of fish stocks within biologically sustainable levels decreased from 90% in 1974 to 68.6%. Thus 31.4% of fish stocks were estimated as fished at a biologically unsustainable level” (FAO, 2016).

In the Gambia, an estimated 30,000 people are employed in the fisheries. The sectors serve as a source of livelihood for about 200,000 people. Furthermore 12% of the country’s GDP is derived from the sector (Jaiteh, S and Sarr, 2010). In addition to its contribution to GDP, fish serves as a vital part of our dietary intake. Ragusa (2014) estimated that fish provided “about 40% of the total animal protein consumed in The Gambia”. In a survey conducted by Ragusa, 1410 head fishermen of which 805 were Gambians while 605 were foreigners were counted on landing sites. In the survey, Ragusa found 4694 employed as assistant fishermen of which only 22% were unpaid as family men which shows the significant number of people directly earning their living from our waters. The survey revealed that 1,329 fishermen (94%) used canoes for fishing mainly the dug-out, 696 used boats (50% of the total), and 37% used planked-dugout with the (Ragusa 2014).

Fisheries in the Gambia serve as both a source of employment, diet and revenue for government. Except for the type of fishing nets used by these fishermen, it is generally agreed that their scale of fishing do not threaten the fish stock and biodiversity of the ecosystem. However, Jaiteh, S. and Sarr have warned that Gambia’s fish stock are vulnerability to “climate change and variability in a number of ways” including “recruitment failures and reduced population of economically important fisheries species”.

In addition to challenges posed by climate change, we must be cognizant of the potential harm posed to our fish stock by unsustainable industrial fishing. Although some have downplayed the potential negative impact on the fish stocks by the seemingly poorly governed industrial fishing, it must be stated that data on artisanal fishing in the Gambia has been seen as dubious by researchers (Horemans et al. 1996; Lazar and Somers 2011). Similarly, “the industrial catch data remain even less reliable … official fisheries catch data tend to underestimate catches, and thus fail to document the crucial contribution of fisheries to Gambian food security” argued Belhabib, Mendy, Pauly, Zeller (2013).

According to Belhabib et al, “total catches from The Gambia EEZ were estimated at 6 million tonnes between 1950 to 2010…Reconstructed domestic catches were shown to be 2.5 times higher than the data supplied officially to FAO on behalf of The Gambia. However, this under-reporting component is decreasing, due to the establishment of regular catch assessment surveys” (2013). Thus it is still difficult to accurately tell the rate at which fishing stocks are being consumed. But the scarcity of fish in markets, scene of waste fish by industrial fishing on our seafronts are a telling story.

As the Lent has been observed and Ramadan approaches, with many families using fish and fish products as an essential part of their delicacies, as World Labour Day is finally here once again, with many Gambians depending on the sector, we must remember that the river and fisheries is an essential part of our lives. The shortage of fish in the market which results in it being sold at exorbitant prices means a lot to national development. It extracts the minimum income of the few who can afford it. These impacts are first and worst feel by the poor people (almost everyone in the Gambia). Many of them will continue to struggle to get enough protein in the absence of fish. This is awful for every one of us but more so the future generation. Will they find anything when they are here? Granny used to tell us that: “Ahh during our time, no one will eat this kind of fish”! We may not know the consumption needs of the next generation but we owe it to them that we deliver what motherland provided for all of us.

It has been established that large scale industrial fishing drives away subsistence and artisanal fishermen away. What would be the impact of this on the 200000 people who depend on the fisheries on the Gambia? Can and are fishing industries willing to accommodate those who will be left out of business? What mechanisms is government putting in place to ensure that wealth trickles down to them? The fishing industry is getting under pressure and this is not sustainable. The fishing and coastal residents are well aware of this and they have been fighting to get back their rivers. It is their heritage and they do have a right to it. It is getting precarious, fragile, and terrible! The extent of the damage done by the demand for industrial fishing poses more destruction to the environment as seen in Gunjur and elsewhere.

The government’s prevention of the over exploitation of the Gambia’s fishing industry will be critical for promoting national development. It is the responsibility of the government to protect the resources of the state and ensure its proper utilization for the well-being of its citizens. The fishing sector being a public good needs state action; robust reforms and protection efforts from the government is imminent.

Although the government has promised to “promote a vibrant Fisheries and Aquaculture Sector through research, sustainable management and utilization of the fisheries resources that would enhance employment and livelihood opportunities, income and foreign exchange earnings, food and nutrition security” during the implementation of the National Development, the government must be reminded that the current industrial actions and negligence of concerns raised by communities is anti-developmental. The Gambia does not need a democratic government alone, it does need an “environmental government”, a government that is sensitive to the environment, one that does not jeopardize sustainability for infrastructural development or growth in GDP growth.

Although it is prudent to involve other relevant stakeholders –locals as the indispensable –the government should take up core responsibility. The government remains the fundamental body to safeguard our environment and fishing sector. The relevance and centrality of the local people is indispensable in this (safeguarding our fishing industry). The government should not choose to leave them out of the equation. Grave reforms are required to curb the activities of dubious fishing firms operating in our coastal areas. Foreign fishmeal firms are rendering our environment and fishing sector susceptible to the underdevelopment of our country. Their massive natural resource extraction in our coastal areas is alarming. This is a challenge and threat to the development of our country.

They are endangering the income and nutrition generation from this sector and this is destructive to national development. The sustainability of our environment and fish is crucial to our economy and health. Economy and health are key two pillars of national development. When the two crumble, state crumbles! We hope that the action plans designed from the NDP for the Governance of the Fisheries are implemented with high regard for sustainability and not just increased revenue and employment through industrialization. By the time the firms are done in The Gambia, they will leave the country vulnerable, exposed to environmental risk and take off a crucial source of protein from our plates. Who knows what happens on our waters beyond our gaze? What remains important is an appropriate response from the government. Allama Nyewolu meh la jang! Bonne Ramadan. May Nature bless our local fishers for their sustainable fishing practices!