On press freedom, where there is no terminus 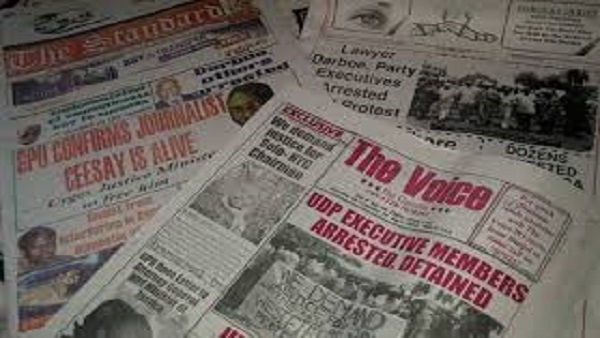 In September 2019, A.G Sulzberger, the publisher of the New York Times wrote a piece entitiled: The growing threat of press freedom around the world. The piece examined the challenges New York Times reporters and others face on a daily basis to report the news around the world despite the threats on their lives. Barely a month after that piece was published, The Standard Newspaper in The Gambia published Barrow says he’s mandinka, unlike Sulzberger’s piece, this one generated a furore the likes of which nearly brought Facebook’s newsfeeed down.

The whole gamut of the criticisms on Standard’s news headline was mainly out of certain concerns about the grey area: tribalism. After the tornado, the low-profile, managing editor, Sheriff Bojang said the newspaper found the item ‘newstritious’ and I agreed with him. That the Standard newspaper editorial judgement was wrong in publishing the pieace is tantamount to saying that the one who uttered the statement was a minor (perhaps a nobody) whose decision was not appropiate to be amplified. If the president of the Gambia indulges in trivial issues, reporters with noses for news will go ahead and publish the issue.

What we perhaps failed to realize was that the president knew his actions will ultimately pay off after he accepted the invitation by the Tabital Pulaagu organization to speak at the event. “My father is a Mandinka and my mother is Fula and the Sarahules are my uncles. I think my this connection with all these tribes is what is driving fear in some people about me,” President Adama Barrow was quoted to have declared these remarks at the meeting. In their quest to report the news, society mustn’t take aim at the messengers rather it is the doer of the action who should be held accountable. This is why, Sulzberger’s wide-ranging piece speaks to us: “Around the globe, a relentless campaign is targeting journalists because of the fundamental role they play in ensuring a free and informed society. To stop journalists from exposing uncomfortable truths and holding power to account, a growing number of governments have engaged in overt, sometimes violent, efforts to discredit their work and intimidate them into silence.”

In January, the Gambia government swiftly demonstrated the often-maligned idea that journalists are troublemakers; perhaps the best way to stop them was close their media outlets. In the aftermath of the protest for the president to honor his campaign promise to resign after serving three years in office, journalists Pa Modou Bojang, Giby Jallow and Kebba Camara were arrested and detained for allegedly inciting violence and breaching the terms of their licenses. Arrest, torture and killing of journalists has been the norm in The Gambia over the years, only that when this government had promised the electorate once they came to power, all the draconian media laws would be repealed.

Three years on, the government did not only renege its promise, it appears, campaign rhetoric and the realities on the ground are in sharp contrast. I could help but agree more with Sulzberger when he writes: “The true power of a free press is an informed, engaged citizenry. I believe in independent journalism and want it to thrive.”Indeed, there has been a proliferation of media outlets after the ouster of Yahya Jammeh, however, newspapers and media outlets are nothing without content. The situation mustn’t be akin to the proverbial giver who doles out to the beggar with the right hand and then takes it back with the left hand. For far too long, this government thinks that it has done better than the previous government when it comes to press freedom. It beats my imagination to hear condescending remarks by this government that the system is open and transparent.

What happened to the draconian media laws when the “system” was busy cherry-picking; one of the first major developments was to amend a portion of the constitution which paved the way for the appointment of what was then an over-age vice president Fatoumatta Jallow-Tambajang. On Covid-19 and the influence of the social media, vice president, Dr. Isatou Touray alluded to the influence of social media during her recent interview on GRTS’ Checkpoint. She spoke in glowing terms about the influence one person has with a recorded video on the masses. Ostensibly, in a democratic society, we should all have options to either challenge the dominant narrative which is sometimes contaminated or create our own niches where the information superhighway is fed with alternative sources. Thanks to the power of social media, presidents who are not connecting with the people are held hostage by known and anonymous cyber warriors. In the long run, they either speak to the people or pay the price at the polls. This exceptional army on social media that up the ante on government and public officials is one of the reasons why the much-needed reforms on press freedom should not swept under the carpet in The Gambia.