Letter to TRRC chairman: Essa Faal unconstitutionally and maliciously denied me access to justice at the TRRC Party 2 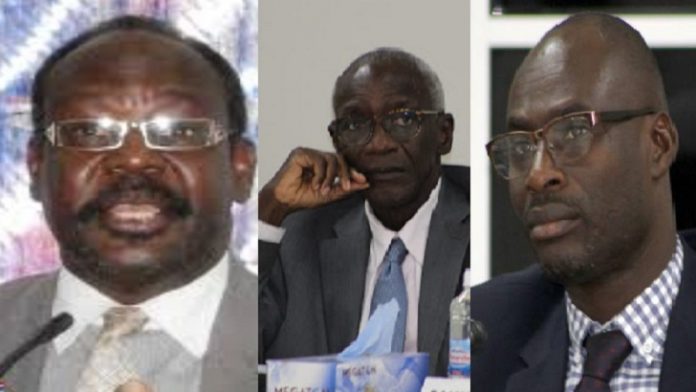 It is of paramount legal and constitutional importance, to first note from the Preamble, that I was unlawfully and unconstitutionally removed as the substantive Solicitor General and Legal Secretary, at the Attorney General’s Chambers & Ministry of Justice, during the said period, by Ms. Marie Saine Firdaus and her ill-intentioned alleged accomplices. “He who comes to equity, must come with clean hands”, as the famous equity maxim goes.

Secondly, the said Preamble, only authoritatively talks about “….violations and abuses of human rights.” It clearly does not talk about “…serious violations and abuses of human rights”, as my learned junior, Mr Essa Faal, the TRRC Lead Counsel, has wrongly and unpardonably asserted. The appropriate Latin maxim in English Law, that is applicable in such a legal scenario is: “ExpressioUnius Est ExclusioAlterius” (Latin: ie when the law expressly mentions one thing, it excludes what has not been mentioned). This famous Latin maxim, is also an aid or a legal tool for statutory interpretation, in order to find out, what was Parliament’s Intention, at the time it was passing, a particular law?

If what Mr. Essa Faal told me and my friend, and what the junior TRRC officer told me and the senior government lawyer, concerning my TRRC Petition, was what the TRRC accepted, so that it refused to hear and investigate my Petition, then automatically, Mr. Essa Faalhas allegedly committed the following heinous criminal offences, namely :- Count 1 :- “Giving false information to a Public Officer,” contrary to Section 114 of The Criminal Code. Count 2 :- “Abuse Of Office”, contrary to Section 90 of The Criminal Code and Count 3 :- “Obstructing Justice”, contrary to Section 102 (B) and ( C), of The Criminal Code. Coincidentally, The Gambia Criminal Code was single-handedly drafted in 1931, by my late paternal grand uncle, Honourable Mr. Wilfred Davidson Carrol, an Oxford University-trained lawyer (a Fellow of Merton College), and an Honourable member of The Legislative Council during the Colonial era (the equivalent of our present National Assembly or Parliament).

For more about him, let me refer readers to 2 books:- (1) “The Untold Stories of Oxford University Black Scholars” , by Ms Pamela Roberts and (2) “Patriots: Profiles of Eminent Gambians”, by Mr. Hassoum Ceesay, Director General of NCAC. This masterpiece book was launched in January,2016, by Mr. Sheriff Bojang, Proprietor of The Standard Newspaper, by then he was the able Honourable Minister of Information & Communication Infrastructure. Finally, the fourth heinous Criminal Offence, which Mr. Essa Faal has allegedly committed, is:- Count 4:- “Violation of his Oath Of Office”, contrary to The Oaths Act (1965). After Mr. Essa Faal was officially appointed as, Lead Counsel of the TRRC, by His Excellency, President Adama Barrow, he (Mr. Faal), stood before His Excellency, President Adama Barrow, Honourable Cabinet Ministers and other dignitaries at the State House, and took his Oath Of Office, while holding the Holy Quran, up in his right hand, and he said these solemn words: “I Mr. Essa Faal, do swear, that I shall execute the Official functions of Lead Counsel Of The T.R.R.C., without fear or favour, affection or ill will, so help me God”It is axiomatic or it goes without saying, that what Mr. Essa Faal, my learned junior and Lead Counsel of the TRRC, has maliciously done to DR. Henry D. R. Carrol (M.R.G.) and his aforesaid Petition, was indeed, by any stretch of the imagination, ill will of the highest order. After taking the 3 prescribed Oaths, Mr. Essa Faal then signed The Oaths Register, he therefore cannot now claim the Contract Defence of “Non Est Factum” (Latin:-ie not my deed).

What Ms Marie Saine Firdaus (the then Attorney General & Minister of Justice of ex-President Yahya Jammeh), and her alleged accomplices, maliciously did to me in 2009 (ie unlawfully and unconstitutionally demoting me from the Office of Solicitor General & Legal Secretary, to the Chairman Of The Law Reform Commission), was indeed a flagrant violation of Section 169 (1) (A) and (B) of our present 1997 Constitution, which reads: “ (1) No Public Servant shall be (A) victimized or discriminated against either directly or indirectly for having discharged his or her duties faithfully according to Law or (B) be removed from Office or reduced in rank or otherwise punished , without just cause.” In 2009, when I returned home from an official trip to Hong Kong, MsSaine-Firdaus daringly told me that she had received an official letter, from the Secretary General, Office of the President, for her to redeploy me, but in fact she illegally incited the Public Service Commission (PSC), to illegally demote me, for doing nothing wrong.

In the light of what I have now exhaustively explained and analyzed above, I will now like to humbly ask you (Honourable Chairman of the TRRC), whether the TRRC is now ready to investigate my Petition, by inter alia calling upon me to testify, before the TRRC? If your answer to this important legal question is “Yes”, then I will like to know how soon because “Justice delayed, is Justice denied”, as the famous legal adage goes, and because the TRRC, has now exhausted one-year, of its two-year mandate. But if your answer to the said Legal question is “No”, then I am hereby withdrawing all original exhibits and my said Petition, but the TRRC, may make photocopies of them, for its official records. After having withdrawn the aforesaid, I will then have three legal alternatives, to access Justice: (1) Firstly, I may file my Petition, at the National Human Rights Commission. When I told this to Mr. Essa Faal, he rudely and maliciously told me: “Of course, if you file your Petition at the Human Rights Commission, you will certainly win your case, because you are a Christian and the Chairman of that Commission, is also a Christian, and that will be official corruption.”

This is indeed discrimination on religious grounds, contrary to Section 33 of the said Constitution. Section 12 (B) of the National Human Rights Commission Act, 2017 reads “The Commission shall: (B) monitor, receive, investigate and consider complaints of Human Rights Violations in The Gambia, including violations by private persons and entities.”(2)Secondly, I may file my Petition, at the National Assembly Select Committee on Human Rights and the Constitution. (3). Thirdly and finally, I may go to the High Court in Banjul, and ask the Honourable Court, to grant me two important legal remedies, namely:- (A) A Declaration, to officially declare that my Petition, is indeed within the official mandate of the TRRC, and (B)An Order of Mandamus, which will command the Honourable TRRC Chairman, and all distinguished TRRC Commissioners, to fully implement their official mandate, as clearly stipulated in the TRRC Act (2017). I am extremely grateful to my learned friend, the aforesaid senior government lawyer, for graciously giving me a copy of the TRRCAct (2017), free of charge. Indeed “a friend in need, is a friend indeed”, as the famous adage goes.

In 1994, 5 Gambian lawyers were officially called to The Gambia Bar, by the late Nigerian-born Honourable Mr. Justice BrimaOmosun, the then able Lord Chief Justice of The Gambia, and the newly qualified lawyers were:
Ø Mr. Henry D.R. Carrol (Later DR. Henry D.R.Carrol-M.R.G.), LLB Hons University of London, via Buckland University College, Oxford, (self-sponsored),
Ø Ms. Rachael Mboge (now Mrs Mendy), L.L.B. Hons., U.K.
Ø Ms. Ida Jallow, LLB Hons Fourah Bay College, University of Sierra Leone,
Ø Mr. Musa Gassama, LLB Hons Fourah Bay College, University of Sierra Leone &
Ø Mr. Essa Faal, LLB Hons Fourah Bay College, University of Sierra Leone.
I have always made it abundantly clear to Mr. Essa Faal, that even though we were all called to the aforesaid Bar on the same day, that notwithstanding, I am clearly his learned senior at the said Bar, because “C for Carrol” comes before “F for Faal”, and if he refuses to accept this, I always put it to him, that he is alphabetically bankrupt. This same principle, also fully applies, to the other four aforesaid lawyers. I am highly elated, that Mr. Edward Singhatey, one of my best LLBdegree students, at the Faculty of Law, of the University of The Gambia has now been successfully called to The Gambia Bar, and when he came to testify at the TRRC recently, he clearly gave Mr. Essa Faala very tough time, to the extent that, Mr. Essa Faal, wrongly and unethically called him “a liar”, and you Honourable Mr. TRRCChairman, rightly instructed him to apologize to Mr. Edward Singhatey, the immediate past, His Excellency the ECOWAS Vice President, and Mr. Essa Faal had no alternative, but to fully and publicly apologize to Mr. Singhatey.
Conclusion
Apart from whatever reparations/compensations the TRRC may decide to justifiably award me, after thoroughly investigating my alleged human right violation (ie compensation in cash or kind, or in cash and kind), may I humbly remind the HonourableTRRC Chairman and all distinguished TRRC Commissioners, not to forget to also include or factor in, the difference between the salary and emoluments of the office of Solicitor General and Legal Secretary, and the inferior office of the Chairman of the Law Reform Commission, which should be deservedly and rightly paid to me with interest, from the date I was unlawfully and unconstitutionally removed in 2009, as the Solicitor General & Legal Secretary, to date.
I thank you profusely in advance, for your positive co-operation and heightened sense of “even- handed justice”, equity and fair play. “…..Let Justice guide our actions, towards the common good….” (The Gambia’s National Anthem).

Finally, during my interesting encounter with my learned junior, Mr. Essa Faal, in my friend’s house, when I asked him whether he had the political ambition of being a candidate for the Gambian Presidency, he arrogantly said: “of course, everybody knows, that if I have the ambition of becoming the next Gambian President, after His Excellency, President Adama Barrow, I am indeed the most qualified Gambian for that post, I have satisfied all the constitutional requirements for that.” I told him it is his democratic right to run for the Gambian Presidency, but whether registered Gambian voters in their right senses will vote him in, so that the HonourableIEC Chairman will officially declare him as President-Elect is an entirely different matter, and I finally reminded him about the famous adage: “If wishes were horses, then beggars will ride.”
I rest my case.
Yours in the Rule of Law