On the need to raise the bar and maintain high standards 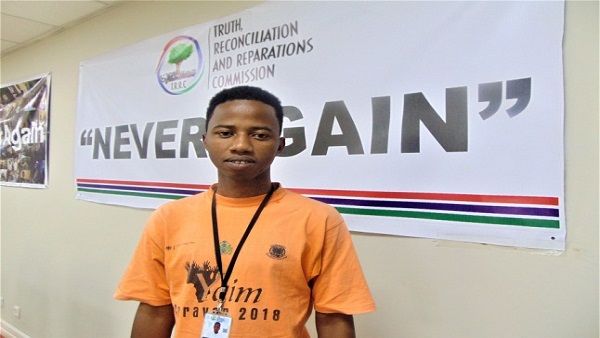 It was Will Durant (and NOT Aristotle) who said “We are what we repeatedly do. Excellence, then, is not an act, but a habit” in his book, “The Story of Philosophy”.

If you add to the foregoing nugget of wisdom, the divine revelation in verse 148 of Surah Baqarah, “fastabiqul khairaat aina maa takoonoo ya’ti bikumullaahu jamee’an.” (then strive together (as in a race) Towards all that is good. Wheresoever you are, Allah will bring you Together); then you would agree with me that raising the bar from our abysmal low in this country, and to strive to maintain high #standards becomes a religious obligation.

In a letter published by the Standard newspaper, Thursday March 12, 2020, written by one Yankuba Jallow, claiming to be a final year law student at the UTG, I was vilified and pilloried in the most unjust manner.

The writer attacked me under the caption “No person or authority can shut down TRRC Letter to Momodou Sabally” in response to a whatsap audio message that never mentioned my name as the creator of that message. The whole episode reminded me of the very first stanza from Bob Marley’s song “Stiff Necked Fools”: Stiff-necked fools, you think you are cool… Yes, you have got the wrong interpretation. Mixed up with vain imagination!
In fact more than a week before the publication of this malicious letter by the Standard, I had published a whatsApp audio message dissociating myself from the said audio. A Mentee of mine suggested that I publish the same disclaimer on Facebook in text form; which I promptly did so that it became clear the audio referred to by Mr. Jallow and many others, was not mine. I went further to clarify that any audio made my me comes with my vocal signature at the beginning and end of the message.

But some Gambians are interesting beings. I must admit that Mr. Jallow was not alone in the attacks launched against me regarding the audio. Many people called friends to vilify me without any evidence that the said audio was made by me. A man claiming to be a follower of the Ahmadiyya religious order actually insulted me on Facebook for that audio. To his credit, he did apologise when he found out that the audio was not from me.

As for Mr. Jallow, his teachers need to ‘detain’ him at the university a bit longer because if such a character is let loose into the legal profession, then he might cause some unintended damage to the profession. For God’s sake, the practice of law is based on the foundation of evidence. The business of law is not one that is rooted in emotions and mere verbiage. The young man should take more lessons or repeat a few. Where is the evidence that the audio he listened to was made by Momodou Sabally?

I have strong views on many issues including religion but I am the most respectful of other people’s beliefs and opinions. I am not the one to force my views down the throats of dissenting voices. I have adopted this attitude of tolerance for religious reasons and not any malleable legal or ethical ethos that is in flux due to human caprices. My Qur’an has taught me to be tolerant and that I have no authority to condemn others or decide their fate.

Since the author of the letter dwelled a lot on the TRRC, let me switch to that. For the record, I am one of the first Gambians to criticise the set-up of the TRRC and I still stand by my criticism of that institution. However, I have never called for the banning or stopping of the TRRC and its proceedings. I am very much sensitive to the plight of the victims and I believe that they have the right to be heard.

My criticism of the TRRC was based firstly on the disingenuous appointment of Alhagie Saidy Barrow as Director of investigation because he is conflicted. Thank God he has finally ‘recused’ himself from the proceedings of the commission albeit not for any ethical reason.
Other snide remarks I have launched at the TRRC include the suboptimal way in which the Lead Counsel has been performing. I still stand by such criticism made on social media. First, the Lead Counsel was wrong to have openly gifted a witness a piece of land even before other relevant testimonies came in the matter that was at hand. I also made this observation in an article:
When the TRRC was being launched, ICC prosecutor Fatou Bom Bensouda was an invited guest of honour and the whole country glossed over this. Now please read the excerpt (below) as carefully and succinctly observed by journalists Mustapha K. Darboe and Thierry Cruvellier on the website www.justiceinfo.net:

ESSA FAAL’S CONVICTIONS AND PRUDENCE
When on January 28 this year Batch Samba Jallow testified publicly before the TRRC and implicated Fatou Bensouda, the Commission’s lead counsel, Essa Faal, seemed caught off guard and embarrassed … He is a key contributor to the success of this justice process and the credibility of its investigations. He is also a former ephemeral member of the State Prosecutor’s Office of The Gambia in 1994. And more importantly he is a former colleague of Fatou Bensouda at the International Criminal Court. At the hearing, the dialogue between the victim and the lead counsel seemed to end in disagreement about the conclusions to be drawn from Jallow’s experience.

So our Lead Counsel, who is well known for his toughness on witnesses, constantly in attack mode, morphed into a de facto defence counsel when the subject was a close associate of his. Could Essa Faal have taught our young lawyers a good lesson in standards by recusing himself from that seat when close associates like his former boss Bun Jack appeared before the TRRC?
But despite all the aforementioned criticism, I never suggested the closure of the TRRC. I was just speaking as a concerned Gambian who thought that we could have operated on higher standards in our proceedings for the common good. The ‘mbojo mbojo’ standard we have espoused in New Gambia is bad and not necessary. But with emotions at their pinnacle during the first two years of this transition some people simply attacked me for voicing my opinion. Thank God saner minds are gradually prevailing now with lots of them reiterating hitherto unpopular positions I had held.

Where on earth could you have someone with the record of Amie Bensouda serving as Lead Counsel in any proper legal or quasi-legal setting, dealing with matters that have her own fingerprints deeply embedded? And then you come to see Essa Faal use a national platform to settle scores in the open; clearly taking positions that favour his ‘constituency’!
Without a doubt, the TRRC deserves criticism but no one should threaten the institution and its staff with closure or banning or any thing close to that. Such utterances and the threat to expel people with different religious beliefs from the country are actually the main reasons why I rushed to dissociate myself from the whatsap audio for which Mr. Jallow and his likes are berating me. Yet TRRC can and should do better.

A case in point was the testimony received by the commission on the plight of the media fraternity under the Jammeh regime. The GPU’ S.G came and presented an impressive record of how his people suffered.

Yet the TRRC never lifted a finger to show the world how the same press that was a victim was also a villain in many ways. There are thousands of Gambians who suffered because of professional misconduct, and someimtes outright malicious conduct, of the press during the Jammeh era; but all these things were swept under the carpet during these proceedings. No wonder we are already seeing clear repetitions of the errors of the past in the operations of all four estates of our state architecture.

Are we not shortchanging future generations of Gambians and the victims in particular by marring the TRRC’s proceedings with palpable bias?
Indeed I am not beyond reproach regarding the context of all I have stated in this essay. But I am man enough to admit my errors and to know that we need to rise above the levels we are condemning the past regime for. I have acted (in the past) in ways and manners below the highest standards expected of me, albeit under the most insidious levels of coercion but I have decided that “Never Again” should not be a mere slogan on tv and banners.

We must live the ethos of “Never Again” as a nation and the best way to ensure that reality is to maintain and sustain high standards based on fair play. Mediocrity is a disease that will gnaw at the very fabric of our society and bring us down, as a nation, into the abyss. We must strive to rise up to new levels of professionalism and fair play if indeed we are serious with the concept of “New Gambia”.

Should we not pitch for higher standards in this country? Can’t we for once embark on a national day of fasting and repentance and to take a new covenant to raise the bar and maintain decent and respectable standards in our country?
A lot of water has passed under the bridge and we know for sure that our development partners have lost hope in the “New Gambia Project” as evidenced by their palpable snubbing of the pledges they made towards the implementation of our national development plan. Yet all is not lost. We can decide to sanitise our transition and pump in some much-needed Adrenalin for a new take-off based on self-reliance, national unity and genuine reconciliation.

Gambian president Adama Barrow has to read the Wuhan-files

By Samsudeen Sarr I hope Gambian president Adama Barrow and his close advisers are following the hot revelations on CNN about the “Wuhan-Files”, classified-leaked documents...
Read more
View Point

By Babucarr Gaye The Sisters Show quickly set itself apart from other shows when it came onto the scene a few months ago. It's the...
Read more
- Advertisment -