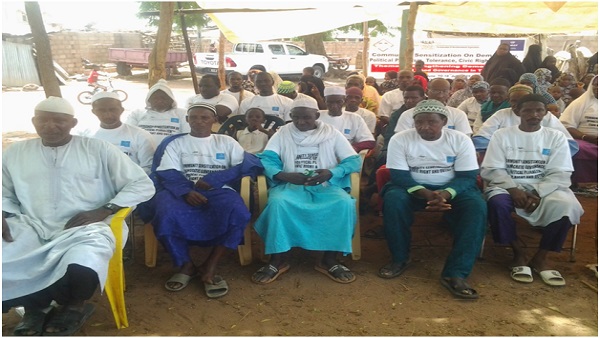 The programme, which is expected to reach all communities, started on June 18 and will end on 18 July.

In collaboration with the Association of Non-Governmental Organisations – Tango – the NCCE is being supported in this initiative by the United Nations Democracy Fund (UNDEF), under its two-year Strengthening Human Rights and Good Governance in the Gambia project.

The advocacy and awareness creation programme seeks to engage all sectors of the Gambian society in a bid to contribute to the democratisation process of the country following the change that ushered in a new government in 2016.

The overall objective is to enhance awareness and understanding of democracy, rule of law, fundamental human rights and freedom, civic rights and duties of citizens in a democracy and help promote peaceful coexistence within communities.

NCCE chairman Sering Fye, told the gathering that democracy is entrenched in the equality of all citizens and does not recognise division of citizens into majority and minority ethnic groups, religion or status.

“It is therefore the duty of every citizen to recognise each other’s sovereignty and live together as brothers and sisters,” he advised.

The Alkalo of Panchang, said the sensitisation is “very important because we don’t know much about our civic rights and duties.

I would also like to thank the NCCE for coming here.”

The touring party then continued to Darsilameh in CRR.

There, the NCCE chairman stressed how The Gambia “suffered immensely” from poor governance and lack of democractic ideals including human rights abuses in the past regime.

“This resulted in [a] dramatic change of government on December 1st 2016, which ushered in a new democratic dispensation that every citizen is enjoying today,” the chairman said.

Gambianbs are “freely expressing themselves today without any fear of repression,” he added.

Yusupha Bojang, programme manager, NCCE, said what good governance means is the presence of “effective and efficient structures,” which can provide optimal support to citizens to live “a safe and productive life” in line with their desires and opportunities.

One Kebba O Jobe, commented that political tolerance means “accepting and respecting the basic rights and civil liberties of persons and groups whose viewpoints differ from one’s own”.

“All citizens, including political leaders, have a responsibility to practice tolerance,” he said.
Darsilameh Alkalo, Takutala Hagy Drammeh, thanked the NCCE for coming to his village, and urged his people to take note of the programme.

He said a peaceful coexistence with others “is very important to the community”.

The prgramme forms part of the NCCE’s efforts to fulfilling its constitutional mandate of creating and sustaining awareness to cultivate an environment of democracy in The Gambia that will enable all citizens irrespective of affiliation, to participate fully in the governance and development process of the country.