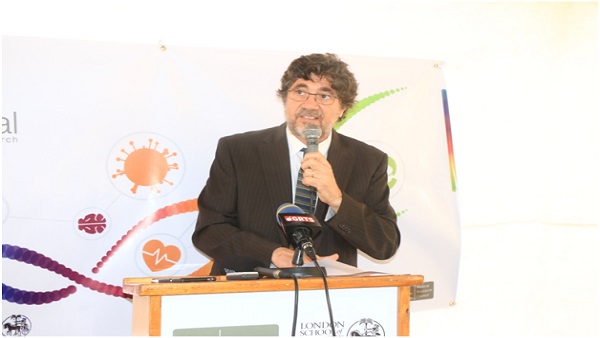 Prof. Umberto D’Alessandro, Unit Director Medical Research Council The Gambia (MRCG) at London School of Hygiene and Tropical Medicine (LSHTM) has been speaking about the importance of research in national development.

He said research is “a very important element” of development, calling for it to be considered as such.

He was speaking at the MRC festival, an annual event which aims to create a community across the MRC to share and celebrate medical research and its contribution to health, the economy and society.

“…MRC Unit The Gambia is a centre of excellence for research that is going nationally in the West African region but also going internationally. We are going to continue to play this role and produce research and information that would help on improving the health of the local population.

“Research is extremely important. Most of the things that are considered as standard today have been discovered quite recently, such as the insecticide-treated bed nets.

Research is important to improve our tools to make the health of the population better.

I would like the people to realise how important research is in general including medical research for the development of the country and for the wellbeing of the people. There is an open attitude towards research and researchers,” he stated.

The event was staged to showcase the work of their female scientists and celebrate their achievements.

Professor Umberto said the aim was to facilitate an exchange of ideas and promote discussions on the role of women in science, and the contributions of the female scientists in the Unit.

He decried the “imbalance” that exists at work places between men and women.

“It’s obvious that this imbalance in terms of recognition is obviously not due to capacity but is due to opportunities. It’s more difficult for women to progress in their career because there is not enough mechanism that allows them to do so.

This is a struggle that is not limited to Africa or to The Gambia but it’s actually across the continent,” he said.

The professor called for the creation of “conditions” that would allow women to progress both in research fields and in others.

“The topic of today is to show you some of our women scientists and explain to you what they have done and how it fits within the activities of the MRC, “he stated.

The event introduced the MRCG’s ‘Women in Science Market Place’, which features seven female scientists from the three themes of the MRCG at LSHTM.

Speaking on behalf of the health minister, Mrs Phebian Grant-Sagnia, principal health researcher, said: “For far too long, discriminatory stereotypes have prevented women and girls from having equal access to education in science, technology, engineering, and math (stem).

As a woman, I know that these stereotypes are flat wrong. They deny women and girls the chance to realise their potential and deprive the world of the ingenuity and innovation of half the population.”

She said Gambian women now stand ready to continue to work in this area at “all levels” with relevant partners to advance this agenda.

“Together, we must galvanise the global community to ensure full accountability to advance women in science, technology and innovation for achieving gender equality and all other development goals. Together, we must ensure that women’s participation in innovation is not the exception, but becomes the norm of life and work,” she noted.