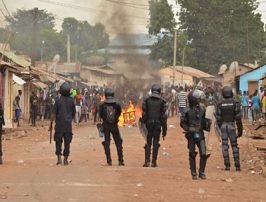 It can be recalled that on Wednesday 24 July youths of Brikama and the entire west coast region gathered physically, psychologically and even ideally to show their grievance or dissatisfaction at the way the chairman of Brikama Area Council and his entourage are steering the wheel of their affairs.

Along the line, it looks like The Gambia police intervention unit were deployed to strategic locations to control the situation by any means possible, looking from the angle from which the scene has unfolded.

Unfortunately the PIU officers were misinformed and have failed drastically in their operations starting from where the mode of operation was nurtured down to the men on the ground. Their failure was not to intentionally suffocate their own people, instead they have failed woefully in the following;

Impact assessment: The PIU vividly failed in the impact assessment of the incident as this was never an emergency operation and also bearing in mind the settlements around the BAC.

In these surroundings where innocent people, some of whom were not even aware of the scene talk less of taking part, lives. Majority of these people are young children, babies and their mothers and older people whose immune systems are immature or weak.

Hey officers why are you so hungry to manipulate the trigger to openly release such a highly concentrated tear gas on your own people as if you were conducting training.

Are you really concern about their health and wellbeing? Do you know that tear or CS gas suppresses the upper respiratory tract? Do you know suppression of such a vital system can risk someone’s death? Do you know asthmatic people can die through this? Do you know you were attempting to kill? If you don’t know, you better wipe your lenses and know now!! You cannot openly release tear gas on people to jeopardise their health conditions.

I want to remind you that health is a fundamental human right!
Contingency Plan or Theory: The Gambia police intervention unit Officers that were deployed at BAC were not informed about the contingency theory or plan putting into consideration the modalities of controlling demonstrators. The men (PIU) need to be informed that there is not only one best way of doing things, even though the end justifies the mean.

Is it that they only know about CS or tear gas in calming or controlling demonstrators even in health risk areas?
Wonders shall never end!
Do you know that the PIU officers discharged this harmful compound or tear gas within the hospital atmosphere?
This was so unprofessional and heart bleeding about The Gambia PIU officers and it’s unacceptable.

In fact we condemned it in the strongest terms possible.

The tear gas diffused in every nook and cranny of the Brikama District Hospital. All the patients, escorts including the nurses and doctors who were there to recue the victims, were struggling to breath normally at some point.

Within the hospital, there were several different patients admitted with several different diagnosis ranging from antenatal women, neonates, paediatrics and other categories of patient.
So the PIU had failed in their pre-planning through impact assessment as to the location of the hospital to the BAC and also contingency plan.

They at some moments were tampering with innocent patients’ lives by introducing tear gas within the atmospheric boundary of the hospital.

Think of those in the labour ward! Does the PIU know that tear gas can cause miscarriage, choke, forceful cough just to mention few?
At the out patient department, two escorts collapsed instantly and a baby of three (3) weeks old was also affected due to the inhalation of the tear gas in consultation room 2 & 3. Other escorts in the observation room ran out and left their people behind, running for their dear lives.

Does the PIU know that tear gas can cause chemical burn in the airways, temporal blindness, bullet vomiting?
Children admitted at the paediatric ward with neonatal and childhood illness are not thought of during the initial planning of the operation. Most of their conditions or diagnosis affect the respiratory system.

So if the PIU expose these children to tear gas that also affect the respiratory system respectively.

Does the PIU know that tear gas is somewhat toxic and can kill people suffering from pneumonia, asthma and pulmonary disease? So they wanted to kill even the patients that were already hospitalized if other factors are kept constant.

Trust me with out an iota of doubt that, the PIU officers are not inform about the content, concentration and effects of the tear gas they are using.

They need intensive training training on how, where and when to use the tear gas.

When my colleagues rushed to the PIU office in Brikama to inform and make them understand that the tear gas from the operation is diffusing within the entire hospital environment, one of their bosses responded, ” Is it my people that take the gas there or is it the wind”|? So ‘blame the wind’ he added.

Lol! What a scruple and trivial statement from a man of such calibre .

Yes! Other people might also argue the same thing but only if they don’t know the relationship between pressure, gas and volume.

So this is a clear vindication that the officers doesn’t even have a clue about the chemical they are using and it’s mode of operation in terms of frequency and duration.

I consider this unprofessional operation of officers, as a superimposed respiratory suppression and diagnose it as a medical emergency.

If I were the OIC of Brikama District Hospital I will have call for legal emergency by filling a case against the Gambia PIU for wanting to deliberately kill my patients.
“Health is a fundamental human right”