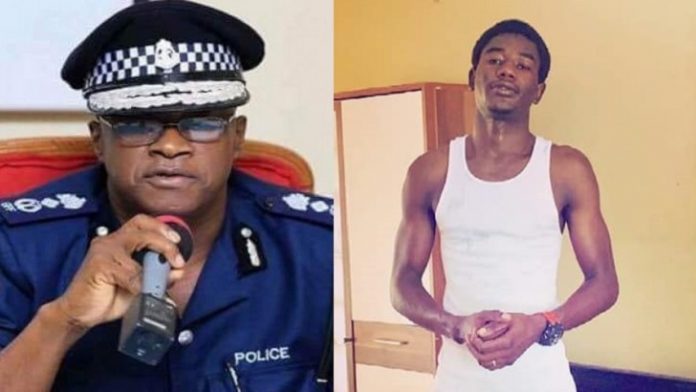 The Gambia police have come under heavy criticism from Gambians at home and abroad over allegations that a detainee was brutalised by the head of the anti-crime unit who subjected them to forced labour.

The man, Ebrima Sanneh from Brikama, said the unit’s head Gorgi Mboob beat him on his private parts leaving him with serious pain when urinating.
The police swiftly issued a statement on its official Poliso Magazine Facebook page denying Sanneh’s claims.

The statement then went on to give the version of the police as follows:
“The Office of the Inspector General of Police has noticed with great concern a story circulating on social media with caption ‘Gorgi Mboob accused of attacking Ebrima Sanneh in his genitals’.

This story is not only false but calculated to mislead the public.
Today Saturday the 25th of July 2020 around 05:00hrs, the Police Anti-Crime Unit received a call for assistance as certain individuals were fighting outside the former Duplex Night Club. A team of Officers were dispatched to the location where they effected arrest on certain individuals.

The parents of the arrested persons were called and it was during this time when Ebrima Sanneh complain of abdominal pain. He was given police escort together with his family members to the hospital. Medical examination was conducted on him and he was said to be without any complications as indicated in an ultrasound scan report.

For verification purposes, his family can be contacted.
The Inspector General’s Office strongly advise all bloggers, writers, and journalists to verify facts on security matters before publication. The cooperation of the public is highly solicited.”

Cover-up allegations
However the victim, Ebrima Sanneh was televised live on his bed at home on Kerr Fatou rejecting the police explanation of the incident and accusing Mboob of personally beating him.

He later issued the following statement to the media:
“Dear Gambian brothers and sisters, I write this press statement to thank you all for your solidarity and messages of support during this tough period. My attention has been brought to a publication from Poliso Magazine social media account titled ‘false news, in the matter of Ebrima Sanneh’s alleged torture’. This press release aimed to refute news reports that I was tortured.

However, the publication also highlighted that ‘for verification purposes, his [Ebrima Sanneh’s] family can be contacted’. Given the seriousness of this matter I am compelled to put it in writing that I was tortured and that the publication by Poliso Magazine contains numerous inaccuracies which are evidently wrong. It is important to note that Poliso Magazine or the authors of the release did not contact me to get my account of the incident. I am disappointed that the police are quick to jump to conclusions and cover up rather than conduct a proper investigation to get to the facts of the issue.

All of us were held in one cell and forced to weed grass in the gardens and farm of Anti-Crime Unit in Bijilo the next morning. As we continued weeding the grass, I mistakenly felled a corn plant and that’s when Gorgi Mboob attacked me. Gorgi Mboob punched me in the face and then hit me with a hoe on my private part after snatching it from my hand.
I was semi-conscious and left on the field like that in pain for what felt like over 40 to 50 minutes without any medical attention. When I got up to urinate, I was in a lot of pain urinating abnormally and discharged what looked like blood. I was then sent back to the cells for further detention.

In fact, I was re-arrested with no warrant or charge around midday of Saturday 25th July 2020 from Kanifing Hospital and dragged back to the Anti-Crime Unit in Bijilo. This time my relatives and friends came to get me and Gorgi Mboob actually pleaded for forgiveness and then I left.

I am currently seeking medical attention as I am in serious pain and request for the public’s continued support and the required space and time to recover physically. I am also requesting that the Police retracts their statement denying my torture. I and my family are currently seeking legal advice.

We appreciate all the support we have been getting and continue to depend on it. For the Gambia our Homeland. We strive and work and pray. That all may live in unity, freedom and peace each day.”

Meanwhile, the National Human Rights Commission has also issued a statement saying it is investigating the said allegations and will recommend appropriate action to make sure that justice is done if it is established that any form of torture was committed.