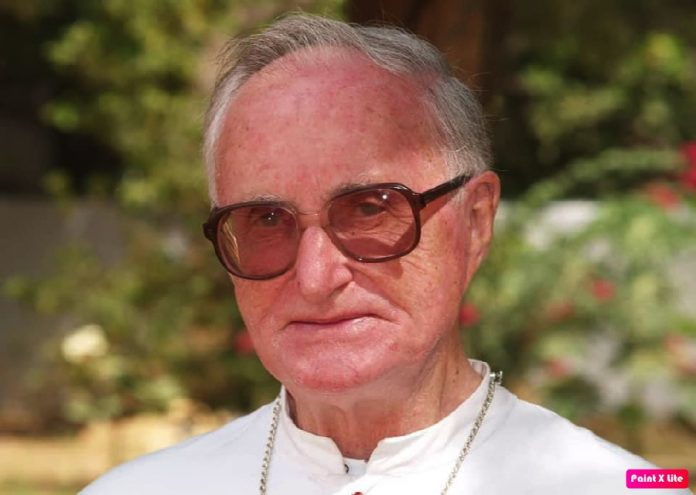 President Adama Barrow joins the Catholic Community in The Gambia and abroad to mourn the demise of Bishop Emeritus Michael Joseph Cleary, commonly known in the country as Bishop Cleary, who passed away today, Thursday, 3rd September 2020, in Ireland at the age of 95.

Bishop Cleary spent most of his life in The Gambia as a teacher and a Bishop.   He first arrived in the country in 1953, and served as a missionary in Fula Bantang and Basse.   He then taught at St. Augustine’s High School for quarter of a century and served there for 17 years as Principal.   In 1981, he was appointed the Bishop emeritus.

One of the historic events, Bishop will also be remembered for is the hosting of his holiness the late Pope John Paul II, now Saint John Paul II, when he visited The Gambia in February 1992.

The love Bishop Cleary had for The Gambia was further manifested after his retirement, he stayed in The Gambia for nine years before finally leaving for his country of origin, Ireland.

May his soul rest in peace.

In the same vein, President Barrow has dispatched a letter of condolences to the family of Mr George Gomez, a fervent and devout Catholic, who passed away on Tuesday.   In his message, the President said the demise of Mr Gomez is a great loss to his family, the sport and entertainment fraternity as well as the entire Nation.  He will be remembered for his initiative in promoting peace and harmony through the May Day Sports, as well as strengthening the ties between Banjul and Ziguinchor in particular, and The Gambia and Senegal in general through his BANZIG exchange programme and later the Senegambia Marathon. The condolence message concluded with prayers for his soul to rest in eternal peace.

President Barrow also joined the football fraternity expressing his condolences to the family and friends of Papa Sarr Corr, and to Real de Banjul on the demise of their former club mate and pray that his soul rest in eternal peace.

As the country is going through trying moments with the loss of many lives, President Barrow calls for all citizens to pray for all departed souls and pray that Allah console their families and loved ones.