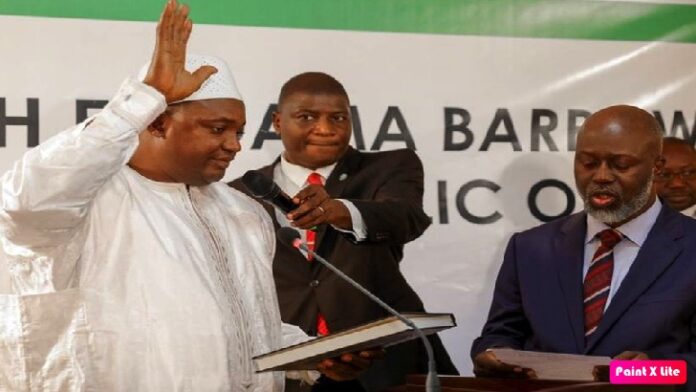 Today marks President Barrow’s four years in power after being sworn in Dakar amid an unprecedented political impasse due to former President Yahya Jammeh’s dramatic U-Turn on an initial decision concede defeat. Since then, a lot has happened; hence I have been struggling with capturing all that had occurred in 1,460 days in one single article.

Nonetheless, it will be fair to say that the Barrow Administration and its Coalition members have mainly failed to live up to the Gambian people’s high expectations who voted for change in 2016. President Barrow had deviated from the mandate on which they (coalition) campaigned and won the election. The Gambians wanted a break away from the dark past and yed sweeping reforms that would usher in a new system. Under Jammeh, The Gambia had been badly wounded and scarred by gross human rights violations, mismanagement of public funds, extra-judicial killings, repression of freedom of expression and the dismantlement of almost all democratic tenets.

Four years down the line, some of the hallmarks of the former regime remain live and vivid. Corruption is rampant, patronage is the order of the day, hiring and firing without advancing reasons remains, pomp and praise-singing accompany presidential convoys. A fleet of luxurious vehicles accompanies the president. Governors and local chiefs are deeply engaged in partisan politics. Top Government officials and technocrats are dragged to partisan politics. Diplomatic and service passports are issued to connections rather than on merit. Hiring is mostly done based on who you know rather than what you know. And the list goes on and on.

Yes, we have freedom of speech, freedom of assembly and free press. Yes, we no longer have political prisoners languishing in jail just because they chose a party other than the President. Yes, we don’t have NIA operative snatch opponents of the regime, real or perceive, and drag to torture chambers. Yes, we no more see family members, relatives, loved ones disappear into the unknown or get murdered by the so-called junglers. Yes, the President has demonstrated his respect for the respect and the independence of the judiciary.

As positive as they may be, these developments are no privileges or handouts because the Gambians have four voted and fought for them. Gambians have voted for both regime and system change involving civil service reform, security sector reform, and public funds’ proper management. They wanted to see an end to self-perpetuation. They wanted to have a new Constitution that would reflect the hopes and aspirations of the Gambian people. Ordinary Gambians wished to see a reduction of commodity prices. Gambians wanted to see an end to patronage and impunity.

Down the line, many of these hopes have dashed. Key among the broken promises is the President’s pledge to serve for only three years after heading a transitional and transformation-oriented Government. Not only did the president decide to serve out his constitutionally mandated term, but he also formed his own party to contest the next presidential election.

A draft Constitution that cost 116 million dalasis was written to usher on a third republic only to be dumped by the President’s allies in Parliament at his behest. The president’s closest aides were publicly critical of the document describing it as discriminatory to Barrow. The Janneh Commission’s recommendations, set up to probe the former regime’s financial malpractices, were largely overlooked by the President. The GRTS, which was once called JRTS for being the mouthpiece of the former Gambian president Yahya Jammeh regularly airs the president’s NPP rallies. The Meet the People’s Tour that is designed to avail the president of the opportunity to listen to the people about the impact of the Government’s policies on them, has been transformed to lambast rival political parties and heap praise the president. Electricity and Water remain scarce and beyond the means of the majority of Gambians. Internet service exorbitantly expensive. The President has promised to set up an anti-corruption watchdog to fight endemic corruption, yet the promise remains elusive.

The President’s supporters would refer to the bridges and the roads the President has either initiated or inherited from the President as clear signs of his development crusade. However, the question remains: Was Barrow elected to build roads or build institutions?