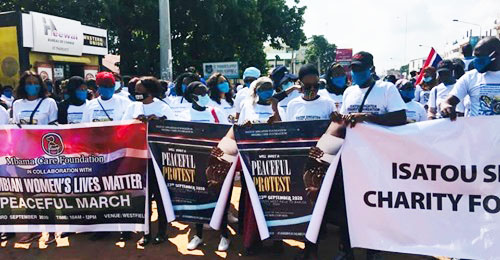 A large turnout of women’s rights activists and supporters staged a protest yesterday calling for an end to the many avoidable deaths at childbirth .

Over a dozen Gambian mothers died at childbirth in recent weeks. The march was organised by the Mbama Care Foundation in partnership with Gambian Women’s Lives Matter and started from the Westfield Monument to Alliance Franco building on Kairaba Avenue.

“A government that is conscious and stands for the people cannot ignore this massive action taken up to demand better healthcare delivery in the country’s health sector. An insensitive government is the only type of administration that will ignore the plight of its citizens when they are dying en masse, under circumstances that could be averted,” he said.

Lamin Kinteh, who lost his unborn child and wife during childbirth showed up at the march to show solidarity with Gambian women.

He urged the government to urgently address the lack of quality service in the country’s health sector.

“Although some of the maternal health sectors have professional doctors and nurses to help women during labor – the problem remains that they do not have required materials to do their work,” he said.

The issue has also attracted the attention of the country’s First Lady Fatoumatta Bah Barrow, who recently posted on her official Facebook page that “no woman should die giving life. Pregnancy and childbirth are special occasions that bring happiness in a family marking a new beginning, however, they continue to be connected with unfortunate deaths and sorrow in many countries, including our own.”

She said they will endeavour to engage the relevant authorities and find means to end this problem.