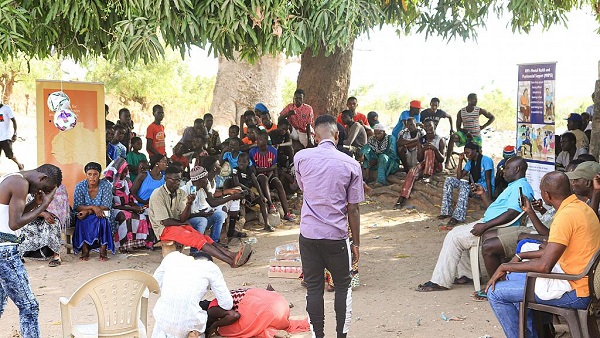 One survivor watched eight members of his family die. Another said he counted 20 bodies washed onto the nearby shore. He saw two fishing boats nearby, close enough to have rescued others. They did not.

These are some of the memories that haunt three Gambian communities – Barra, Essau and Medina Serigne Mass – where earlier this month (19-21 February) the International Organization for Migration (IOM) led a series of individual and community-based mental health and psychosocial (MHPSS) activities to support families impacted by a devastating December shipwreck off Africa’s Mauritanian coast.

Sulayman* is one of the 87 Gambian survivors of the fatal shipwreck which claimed at least 62 lives. Almost three months after the tragedy, psychosocial needs continue to emerge in the communities of return.

“I feel better now, but people in the village keep talking about the shipwreck,” says the 18-year-old survivor. “I don’t feel shy about it. but it takes my mind back to it,” he added, referring to everything he experienced trying to reach Europe from Africa’s coast last year.
“There were two fishing boats who saw us sinking, but they didn’t help us. They knew the area was deadly and yet, they did not help,” Sulayman explained. “You don’t forget that.”

“My family is in mental distress,” added Samba*, who lost eight family members. “Every morning, we wake up and miss our loved ones. It is sad we were not able to bury them.”
The three communities are in the North Bank Region, where 85 per cent of over 250 returnees – from the December tragedy and a second intercepted boat – originated from. The activities were designed to involve survivors, families, community and religious leaders, as well as health and social welfare authorities after a needs assessment was conducted in January.

In each community, survivors were encouraged to bond through small group circles. Led by a trained group leader, these discussions encouraged survivors to share positive and negative experiences, as well as discuss and suggest available coping strategies.
“While in the boat, I said to myself, if I survive this, I will never allow anyone in my family or community to embark on sucha a journey,” recounted Modou*. “All we felt in the boat was regret. It was traumatising.”

Simultaneously, small group discussions were held with families and community members. These were aimed at creating space for learning how best to attend to the needs of survivors who often must destigmatise the experiences of returnees to promote community resilience.

Building on the group discussions, psychodrama was used as a tool for communities to gain deeper insights. The Supportive Activists Foundation (SAF) Drama Team presented a drama emphasizing the mental health challenges faced by returnees, families and communities, which inspired further community dialogue.

Other community-initiated activities, including football matches and attaya (green tea) sessions, were included in the three-day initiative.

To promote the sustainability of this support, IOM trained between two to five volunteers in each community to be ‘MHPSS focal persons’, equipping them with the tools to support families in identifying symptoms of distress, provide basic psychosocial support and recommend necessary referrals.

Through this initiative, the foundations for a more resilient community are being built. “Discussions are ongoing between youth and community leaders about how we can engage youth in meaningful ways; how they can contribute to community development,” remarked Mass Kah, alkalo of Medina Serigne Mass.

This initiative was supported through the EU-IOM Joint Initiative for Migrant Protection and Reintegration, funded by the EU Emergency Trust Fund for Africa. Covering 26 countries, the Joint Initiative aims to support the sustainable reintegration of returning migrants and is the first comprehensive programme to save lives, protect and assist migrants along key migration routes in Africa.

Distributed by APO Group on behalf of International Organization for Migration (IOM).