Sabally advises youths to stay away from politics, focus on education 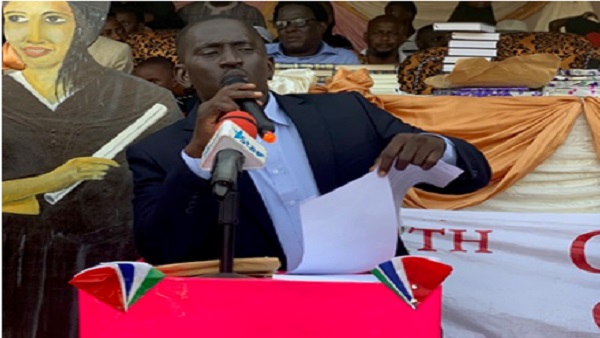 Former Presidential Affairs Minister as well as Secretary General and Head of the Civil Service, Momodou Sabally, was the Guest Speaker at the graduation ceremony of Yunus English School in Busumbala on Saturday June 29, 2019.

Addressing more than 230 graduates on the topic “Education as a Tool for Personal Development and National Progress”, Sabally decried the level acrimony in our current political landscape.

He therefore advised the youths to stay out of politics and focus on their education for personal development and to prepare themselves for active positive roles in our nation building process.

He admonished the youths to eschew any groups or movements trying to create instability in the country and encouraged them to respect the laws of the land as enshrined in the constitution of the republic.

“Everyone has only one vote so there is no need to fight about politics. When the time comes for elections in 2021, just go to the polls and peacefully cast your vote!”
Dilating on the theme of his speech Sabally advised the graduates thus:
“With reference to the verses of the Quran that I opened this speech with, their meanings are quite clear on the surface but just like the deep, vast ocean that the Holy Quran is, these verses have multiple layers of meaning.

“But for the purposes of this speech, I draw from these first two verses of Surah Jumuah, the message that Prophet Muhammad’s mission is to TEACH us.

“And so if the one in whose hands is the key to our redemption has the duty to TEACH us and the first verse that was revealed to him was “Iqra”, then is there anything more important in our lives than to learn?
“Like any good thing, education comes at a cost. From school fees to uniforms and foregone income, we have to pay the price. But the results are more than worth the trouble!
“In the words of the Greek Philosopher Aristotle, “The roots of education are bitter, but the fruit is sweet.”

“One of my favourite role models, American Founding Father Benjamin Franklin puts it this way “If a man empties his purse into his head, no man can take it away from him.

An investment in knowledge always pays the best interest.”

Sabally then buttressed his message to the graduates by narrating his own story on how education empowered him to become a useful global citizen, serving not only his country but people from all over the world.

He paid tribute to the founder and proprietor of the School Mr. Yunus Sillah and congratulated the graduating students and their parents.