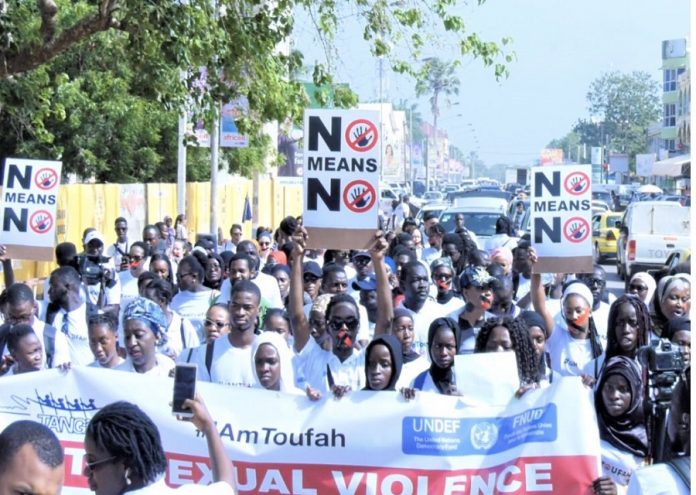 Sexual violence is abhorrent and sickening! Rape as a form of sexual violence and abuse is unholy, demeaning to the victim and despicable.

Therefore, all persons of conscience must denounce rapists and act of raping and support the victim(s).

That was the expectation from Gambians, the governments and its organs on Thursday, 4th July 2019. But greater expectation was placed on the state as the primary duty bearer of the rights of citizens in the Gambia. S. 17(1) mandates all organs of the Executive, Legislature and all natural and legal persons to respect, enforce and upheld fundamental human rights and freedoms in Chapter IV of the Constitution.

Some of the ways of enforcing the Chapter IV rights are enactment and formulation of laws and policies to protect rights as well as condemning and prosecuting violators of rights.

The rights are also respected, enforced and upheld through participating and undertaking activities geared towards the protection and promotion of rights.

Therefore, the protest against sexual violence and rape organised by concerned organisations and individuals on Thursday was meant to protect the rights of women against sexual abuse and other forms of violence against her body, dignity and survival.

Thus, the first entity to support the Thursday initiative should have been the government of the Gambia and its organs. Reliable sources have intimated that no government official and/or its organs have participated in the organisation or attended the protest.

It was only the Gambia Police Force that undertook its statutory mandate to grant permit to the organizers to protest thereby fulfilling the mandate of s.17(1) of the Constitution.

I commend the Police for doing that.

The AG had released a press statement calling on the victims of rape to come forth with their complaints, That decision was laudable but he had missed a great opportunity by not attending the protest to re-echo his earlier call and renew the government and his office’s zero tolerance to rape.

AG as the principal legal adviser to the Government and having right of audience in all the courts in The Gambia ( see s,72(2)) should have been with victims on that day to build trust and mutual confidence which are engines of successful prosecution. That was a miss opportunity and a letdown for victims.

Section 6(3) of the Women’s Act 2010 mandates “all government departments, agencies organs, public or private institutions” to take appropriate measure to promote and protect women’s right and their legal status from any form of abuse or violence by a person, an enterprise, organisation or institutions.

Thus what step is more appropriate than protesting with victims of social violence and abuse? Where was the Ministry of Women and Children, Women’s Bureau, the National Women’s Council, Department of Social Welfare, Child protection units of the armed and security forces, Office of the vice President, which is headed by a woman and founding member of GAMCOTRAP, and others who have constitutional and statutory responsibility to protect and promote the rights of women and the girl child. It was a miss opportunity and a letdown for women and children in the Gambia.

Section 11(1)(f) allows nomination of a woman to represent the women’s group in the Council of the Local Government when members from each word elected by the wards are males who are more than two-third of the members.

In other words, each Council is mandated to nominate a woman to represent the interests of women in the Area or municipality.

KMC has a woman Councillor who represents the interest of women in the Municipality.

Where was she and why did she not participate in the protest since the victims are women and are protesting in her municipality? Why did the Mayor or other Councillors of KMC fail to be present at the Monument to show support to victims and send out a message that the municipality was ready to stamp out rape?
Section 109(1) empowers the National Assembly to appoint committees and currently there are committees that deal with human rights and children.

Apart from that, a National Assembly Member represents all persons in the constituency.

Therefore when members of his or her constituency suffer from sexual violence and are willing to demonstrate against their abuse, the NAM is duty-bound to attend and show support to them.

Thus, their absence was a miss opportunity and a let down by one of the highest organs of the state.

Finally, why did majority of Gambians fail to turn up at the march. Rapists have no bounds.

They prey on victims whenever and wherever The woman you protect today is somebody else’s daughter, and may be your wife, sister-in-law, mother-in-law or daughter-in-law in the future.

On Thursday 4th July 2019, Gambian women and the girl-child were let down by their duty-bearers, except the few NGOs, media, police and individuals who attended the protest.