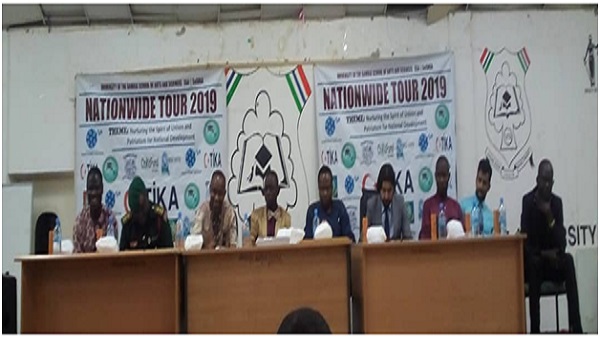 The University of The Gambia, UTG School of Arts and Sciences (SAS) last Friday celebrated its nationwide tour awards night, recognising and awarding some students it deemed ‘determined’.

The awards followed an earlier tour organised by students of the SAS, who went around the country, particularly in the provinces, and enlightened citizens on the importance of university education in national development.

The tour also availed rural settlers the opportunity to learn about the requirements for university education, scholarship opportunities the university has and on the need for national reconciliation and unity.

SAS said it has been embarking on these tours for years now.

The theme for this year’s tour was “Nurturing the Spirit of Unison and Patriotism for National Development”.

The goal was to promote science education in rural areas, with discussions organised with various teachers and students given the opportunity to talk about their challenges and recommendations for the way forward.

Speaking at the awards, Yusupha Fadera, secretary general of SAS, elaborated on what had happened during the tour in which 22 schools were visited, communities and parents of rural students.

He said radio talk shows were conducted during the tour to further disseminate SAS’s ideas in Basse and in other regions.

Highlighting some of the challenges being faced by rural students, he prevailed on government for immediate support for these students.

Essa Marong from the higher education ministry appealed to those teachers from rural-Gambia now based in urban centres to go back to the provinces and help provide better quality teaching for the natives.

He argued: “If people from rural-Gambia do not go back and teach their people, how do you expect someone who grew up in the Kombos to go to these areas and teach?”
A former vice chancellor of Nawec, Momodou Bah, spoke on the need for unity and national development. He called it “a collective responsibility of all [citizens]”.

He encouraged youths to be innovative and to use their intellect to make a difference in their communities.

He also called on them to nurture the spirit of unison, peace and stability in the country.