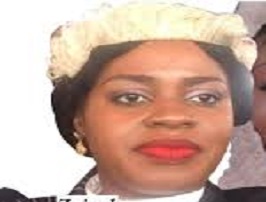 The deceased, Fatou Loum, was murdered in her beauty salon in January 2018 at Kololi with her mouth gagged and her hands and legs tied.

Justice Z. Jawara said she cannot conclude without saying that the commission of murder in the case was international, cold blooded and brutal and very uncommon in this society.

“A strong message must therefore be sent to curb such cold blooded acts that go against the grain of society.

The dreadful crime committed has cut short the life of a young woman brutally, who would never know what it feels like to get married, have children and grow old, all because of a mere D800 and a Samsung Galaxy S2.

This leaves the court wondering what kind of person the accused person is. One can only conclude that he is a psychopath,” Justice Jawara said.

“I therefore have no discretion under section 188 of the Criminal Code on reducing a death penalty sentence.

Judicial notice is however taken of the fact that there is a moratorium on the death penalty, however I can only take notice of this as Section 187 still stands and has not been amended or repealed.

The accused Pap Ibrahim Khalilulaye Thiam is hereby sentenced to death,” she declared.