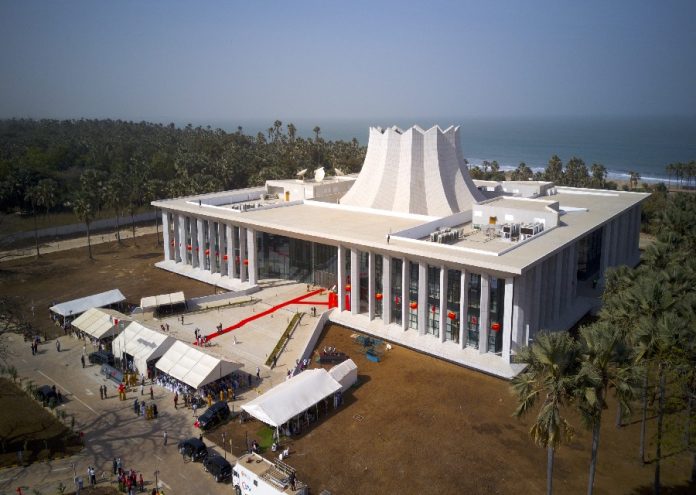 “I have been to a lot of conferences all around Africa but what I saw at the Sir Dawda Kairaba Jawara International Conference Center compares to nothing I have seen before” – These were immediate impressions of the renowned Gambian physician and itinerant, Dr. Adama Sallah, who also doubles as the Honorary Consul for the Czech Republic in The Gambia. Dr. Sallah was part of a delegation of diplomatic and consular corps that was taken on a conducted tour of the facilities at the Center.

Many commentators shared Dr. Sallah’s views that the magnificent edifice overlooking the majestic and vast Atlantic Ocean stands tall among the greatest conference facilities in the West African subregion: great in terms of size, design, and the futuristic state-of-the-art facilities equipped at the center. The conference center covers a gross floor area of 14, 000m² and is made up of a giant UNGA-themed major Conference Hall with the capacity to seat more than one thousand (1000) individuals at a time. Additionally, it has four (4) 200-seat thematic meeting rooms, four (4) press rooms, and news centers, fourteen (14) meeting rooms, two large banquet halls, a VIP lounge, office spaces, and other accessory rooms.

Every modern architectural building must have a distinctive character, and for the Sir Dawda J. International Conference Center, the inspiration comes from a mixture of unique local and transcontinental geographical and cultural features. Located in the Bijilo National Park aka Monkey Park, which is on the oceanfront, the design of the facility is inspired by the white waves of the Atlantic. An aerial view of the edifice nicely places it in the azures of the blue seawater of the vast and furious Atlantic against a beautiful skyline contrasting with the evergreen forest of the park.

The dome-like structure on the top of the building, as well as the Grecian-styled columns and the mimbarr-like (pulpit) design of the high-table area, are all inspired by the majestic and enduring civilization of Islamic art and architecture. Likewise, the complicated yet beautiful arabesque geometric shapes and patterns of straight lines and twisting designs of flowers, vines, and leaves culminating into majestic arches. All of these are fortified by Chinese imagination and technology. Much like the exterior which resembles the Great Halls of the People in provincial councils across China, the interior is glamourized with Chinese art and artifacts with the giant white and blue vases dotted across the hallways.

The Sir Dawda Kairaba Jawara International Conference Center is poised to diversify the revenue generation base of the Gambian economy by projecting the country as a leading tourism destination for business and conferences in the country. Less than six (6) hours away from the US and Europe, the destination should not be hard to sell as an alternative to renowned remote conference countries like Ethiopia, Kenya or Ghana. If properly managed and well marketed and publicized, the center can be a major attraction, especially if it is sandwiched with a high-rise skyscraper.

The heavy arabesque architectural influences stem from the truism that the facility has been built to host the Summit of Heads of State and Government of the Organization of Islamic Cooperation, which is the world’s biggest gathering of world leaders after the United Nations General Assembly. The completion of such a piece of art harbingers the seriousness and commitment of the government in completing all the project works on time.

The Gambia government, under the leadership of The Gambia OIC Secretariat, is running on the fast lane to deliver the projects on time, especially the five priority areas of road accessibility, accommodation, water and electricity, VIP lounge at the Airport, and vehicles. In addition to the conference center being completed, the road projects are well underway. The bids of shortlisted firms have been formally opened and technical evaluation of proposals for the design and supervision of the 20 urban roads is also in progress. Meaning, movement of heavy machines and equipment is expected to start within four months.

Just this week, the OIC received a ‘no-objection’ from the Saudi Fund for the water and electricity component of the projects. That means that the implementing partner, NAWEC, gets the go-ahead to proceed with the call for bids for consultancies. All these are in tandem with ongoing robust engagement and resource mobilization with all the 57-member countries of the Ummah and other partners.

The current leadership of the Secretariat, under the aegis of consummate public administrator, Mr. Yankuba Dibba – who was involved in the post-conflict reconstruction of several countries in the subregion, and the seasoned diplomat, former ambassador Hon. Essa Bokarr Sey, appreciates the huge tasks at hand and the potential of the OIC projects to change a lot for the country for good. To match the demands, the Secretariat oversaw the creation of a dedicated Project Monitoring Office to focus exclusively on the timely delivery of the projects
Such foresight guides the vision of the management to ensure the sustainability of the projects beyond the Summit.

Based on the foregoing, one can be optimistic that commissioning of the People’s Republic of China-sponsored magnificent edifice by President Barrow over the past weekend, marks the commencement of rigorous and relentless work to move the OIC projects from a commitment to action.

Mr. Nfally Fadera is the Head of Brands and Communication
at The Gambia OIC Secretariat. Also independent consultant
in communication, social media marketing, and public relations