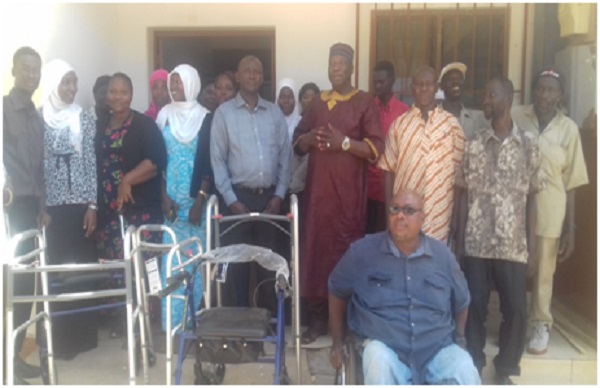 The Department of Social Welfare on Tuesday received a donation of medical equipment from one Sarjo Dambelleh, a Gambian based in New York.

The donation was received by Momodou Ceesay, the National Assembly member for Janjangbureh who handed the equipment to the department of social welfare for onward distribution to the vulnerable people in The Gambia.

Wheelchairs, hospital beds, walking aides, chairs and tables were some of the items donated.

Speaking at the presentation held at the Social Welfare office in Banjul, Momodou Ceesay said the items were sent to him by his cousin and donor Sarjo Dambelleh.

He said the donor secured the items from a hospital in New York.

He said the equipment were not donated to be sold.

“It is free gift to the vulnerable people in our society,” Ceesay said.

He called on the management of the Department to ensure that the items are put into good use and given to the right people.

The director of the Department, Junkoba Jabbi, delights in the gesture and said it was “very timely and long overdue”.

He described Dambelleh as a patriotic Gambian who has “his country at heart”.

“We have a shortage of these equipment.

These items have come at the right time.

“People are desperately in need of these items in The Gambia.

We thank the donor for this magnificent gesture and encourage him to do more of the same,” he said.