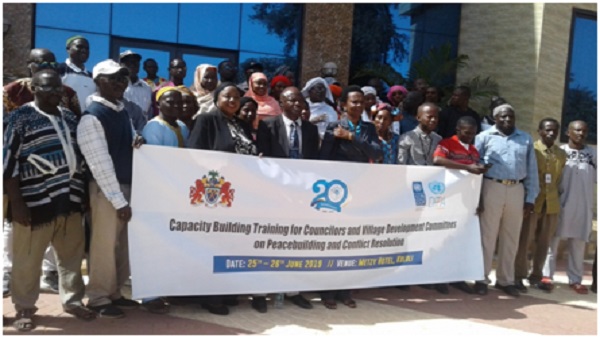 The government of The Gambia is committed to supporting peacebuilding and conflict resolution initiatives in order to achieve aspirations of the National Development Plan including the UN Sustainable Development Goal 16, a principal assistant secretary at the Ministry of Interior said.

Mading Saidykhan made these remarks at the opening of a two-day training workshop, organised for councillors and village development committees on peace building and conflict resolution.

“This training will expose participants to the concepts of peacebuilding, conflict management and transformation, distinction between negative and positive peace, mechanisms for conflict resolution such as mediation, negotiation, conciliation and arbitration as well as stakeholder analysis in peace building and conflict resolution.

“Participants are critical in sustaining the country’s peaceful coexistence.

You have the power to foster dialogue and civic consultation as well as managing and preventing conflict at national, regional and community levels.”

West African Network for Peacebuilding (Wanep) national coordinator, Salama Njie, said councillors and village development committees have the power to foster dialogue and civil consultations and manage and prevent conflicts both at national and local levels.

“You cannot be overlooked on the side of peacebuilding and conflict prevention in the transition process as you can utilise the strength of the people at the local level to enhance the peaceful settlement of violent conflicts for sustainable development,” she told participants.

Speaking further, she said: “Building the capacities of these sectors in peacebuilding is essential especially for rural communities where access to formal justice system is limited.

The two-day forum held at a local hotel in Kololi was organised by Wanep in collaboration with the Interior Ministry with funding from the UN Development Programme (UNDP).

The UNDP representative, Aissata De, described the participants as custodians of our national and local value.

“…Those values that have contributed in no small way in keeping our African societies peaceful for centuries,” she stated.

She commended the Interior Ministry and Wanep Gambia for efforts in engaging councillors and VDCs to sustain Gambia’s peace.