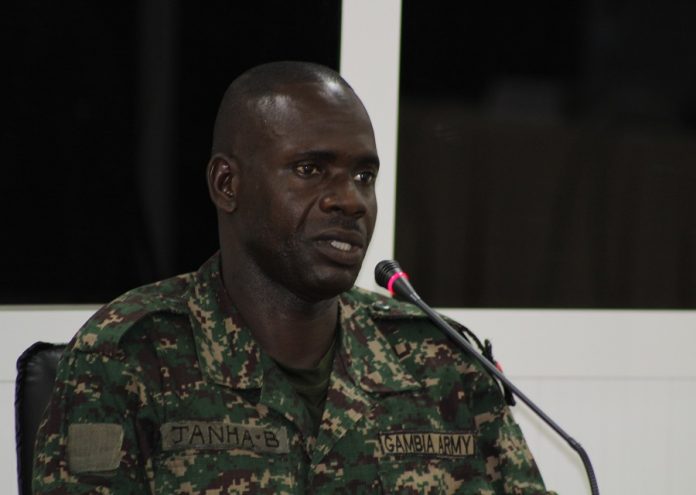 Babou Janha, a member of the Gambia army and former driver to Colonel Ndure Cham, who was accused of masterminding a failed coup plot in 2006, has told the TRRC that he was forced to confess his involvement in the plot by state guard soldiers led by Alagie Martin and Musa Jammeh, leading to his 9 years incarceration.

According to Janha, 43, now a warrant officer, he was put under pressure and forced to sign a written statement or risk losing his life.

He recalled that the State Guards, led by Alagie Martin and Musa Jammeh, arrested him at the army headquarters, and escorted him to the NIA office to face a panel of investigators that included Baba Saho and Foday Barry.

He said during the interrogation, the panelists pressed him with questions and forced him to make statements that he had no idea about.

“They told me they would use me as a state witness in court and asked about the people who used to come to Ndure Cham’s office, to which I replied I did not know any particular one since it was a public office,” Janha said.

He said when the investigators and the soldiers failed in their bid to convince him to confess his involvement or to implicate people, the Guards under the orders of Alagie Martin mercilessly tortured him in the presence of the panel.

“Musa Jammeh was the first to slap and other soldiers also jumped and started beating me mercilessly.

They grabbed my legs and started beating, kicking and hitting me with their combat rifle butts, stamping me.

In fact, they corked their rifles, and Musa Jammeh put his pistol on my neck telling me if I fail to comply they would kill me and nothing will come out of it”, the witness claimed.

He said Martin and his entourage threatened him with death if he failed to sign their fabricated documents. “They were serious with threats and I had to sign the document,” he told the TRRC.

He said the beating lasted four hours, resulting in injuries on his body before being taken to Mile 2.

Janha said he was subsequently charged with concealment of treason and conspiracy before a court martial and sentenced him to 10 years in jail at the maximum-security cell, with little access to his family for 9 years.

He said he regrettably had to sell his compound to pay the services of a lawyer, which he said still haunts him because he was a junior officer at the time.

He said he was released in 2015 under a presidential pardon under conditions which stated among others that he stayed away from politics and avoid going to political platforms and that if any of his cases is reported to the police, he would be taken back to jail for 10 years.