Stay away from troubles

Problems are inevitable but problems also don’t happen spontaneously. Therefore, it requires a positive approach to solve it especially those that lie in a state of ambiguity.

To curtail the discussion let us consider the commandments of our Supreme Creator. Allah makes malediction on those who start problems. In fact, even the notorious people always minimize or stop their problems during this blessed month -Ramadan. Allah even seized the free movement of Satan suggesting that peace and tranquillity should prevail throughout this precious month. And if anyone insists and creates choirs it will bear a bitter result.

The political movement in this country now is going towards doldrums. Politics is a game. And one has to learn the rule of a game and play it more than anyone. Thus, before any political movement an effective orientation has to be conducted. We all have equal rights to spell out our sentiments but it has to be in a systematic way that will earn us a credit rather than devastating our life and land.

To solve this problem we are in today, let us go back to Allah, seek His forgiveness then we pray for him to protect us as a nation. Let us unanimously campaign against such problems because it will bring nothing positive to us rather just a setback to our development.

I wish to apologize all the readers in advance if I may upset you.

If something was wrong yesterday just because you were at the receiving end, but you find it right today just because you are the one perpetuating it. Then you can’t call yourself an activist but rather an opportunist.
Firing live bullets on unarmed civilians on demonstration can never be justified by any form, whether it’s Jammeh or Barrow; wrong will always be wrong. No need trying to give flimsy excuses. To say they called for it and got what they deserved, to me such statement is the lowest our nation can ever go to. It’s not about APRC or the Coalition but rather it’s about protecting and safeguarding the lives of the citizenry as a government.
If anyone breaks the law, the best I expect from my government is to follow the constitutional provisions and make them answerable for their actions but to respond heavily to unarmed civilians to the extent of the loss of life is never the reason I and many citizens voted for change. President Barrow must show leadership at this crucial point in our young democracy. Do not listen to self-centered individuals and sycophants who made Jammeh what he later came to be. This is how everything would start, one person being killed and before you realise daily reports of death becomes headline news. Don’t say you have never been told and it is your primary responsibility to save the life of every citizen and noncitizen residing in The Gambia.
Engaging every one for a peaceful Gambia is never a sign of weakness but rather a great leadership quality. To tell me they deserve what they got is as telling me we deserve what happened to us for 22 years of dictatorship.
The Senegalese contingent under ECOMIG knows better firing against unarmed civilians is against international law and peacekeeping mandate, we see Senegalese demonstrate against their government on daily basis but that has never warranted them to open fire on them. So why do it in The Gambia? I expect my government to get to the bottom and prosecute or withdraw those responsible from the mission, because such actions would only build mistrust between the supporters of Jammeh and the government.
God bless The Gambia!

Letters: Of the APRC/NPP alliance – fighting the last war 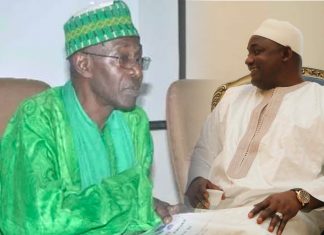 September 20, 2021
As we get closer to the presidential election, there is no shortage of issues to talk about, and one of those is no doubt...