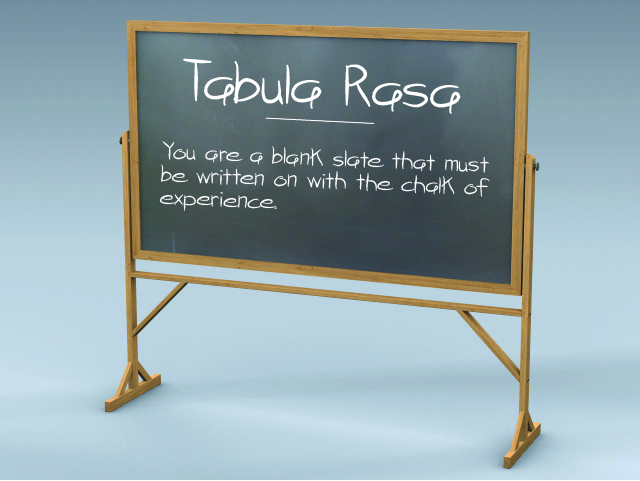 It means “clean slate” as in the slates used for writing in the old days. Some philosophers mean that a newborn baby is like a clean un-written slate or paper which we use nowadays. Tabula rasa is a Latin phrase often translated as “clean slate” in English which originates from the Roman ”tabula” for notes, which was blanked by heating the wax and then smoothing it. The Roman empire lasted from 27 BC – 476 AD, BC stands for ”Before Christ” and AD (Anno Domini in Latin stands for After Christ or Dominus in Latin).
Some of the philosophers from that time believed that a baby was born without any personality traits at all. What became of the child growing up to an adult was what its environment had impacted it with.

During the time of the Roman Empire it was a difficult and time consuming process to create some kind of surface to write on. Slates covered with wax were used as note books or as the small blackboards used by pupils back in the days of our grandparents’ childhood. When the surface was fully covered with writing it had to be erased by heating up the wax and you could continue writing. In a way we could say that you got a new opportunity to erase your earlier mistakes and make a new and fresh beginning. If someone else had used the slate before you, you could erase those mistakes and hopefully make a better result yourself.

Let us look at the Gambia as a slate full of scribbles, mis-calculations and errors. Imagine what an opportunity our current government had to clean “the slate” and make a fresh start. All the errors, the mis-calculations and the scribbling could have been wiped away and they could have begun a new and better chapter in the history book of the Gambia.
How come it is so hard to learn from other’s mistakes? Why do the same mistakes over and over again? People with political ambitions sit at home, complaining over the political situation. They promise that one day, when they are in position to decide, they will change things for the better. They make grand promises and tell people that if they vote on these large mouthed people, everything will be for the better.

When you have nothing, you have nothing to lose but your hope. The hope for a better future for yourself and your family is what keeps you struggling day by day. You vote for the person who gives promises sweet as honey and hope that this will benefit your life.
Suddenly you find out that the person you trusted, the one you shared a glass of attaya with, the one you encouraged to fullfill his dreams, has stopped greeting you. He passes you with his car but he doesn’t offer you a lift even if he can see that you are far from home and it is a very warm day. He doesn’t have time to speak to you, drink attaya with you or even say hello to your wife when he sees her outside your compound.

He doesn’t answer your calls, he has no time for a meeting and it is like the relation you two once had doesn’t exist anymore. It is like you don’t exist anymore, you simply don’t count anymore. You were a stepping stone on his leap for success and by that you are no longer needed. He has kicked you out from his life, you don’t mean more than a stone in his shoe. It is there, it is small but irritating so will be thrown out in the dust.
This happens over and over again, the history has shown us that and unfortunately it will be repeated. How can it be stopped? By awareness and determination!
Awareness of the fact and its implication on people, determination that the negative implication must never be repeated. It is hard, of course, but it is definitely possible. What it takes is a wise and intelligent leader who fully understands the consequences of the earlier mistakes and who is determined to keep everyone on the right track.

Do we have that now? Silly question, because the answer can only be a huge NO.
Reaching a high position, without your own qualifications, is making you believe that you really are something special, otherwise people wouldn’t have put you in that position.
Once again it would be time to consider the saying: ”If something appears to be too good to be true, it often is.” If you haven’t accomplished anything special in life, have no higher education or intelligence, it could be wise to ask yourself the reason for why some people suddenly wish to place you on the highest position in a society.

A person who has some self-distance and common sense might ask himself that question, but someone with a high ambition compared with low skills will seize the opportunity without questions. He is not smart enough to get the qualifications needed for that position, but he is smart enough to be able to calculate how it will gain him.

This is the time when the alarm bells should begin to ring, but for an ambitious person with a corrupt mind there are no alarm bells. As long as there is no functioning alarm system there will be no change in the Gambia. There are too many opportunities to gain a little here, gain much more somewhere else and hide your actions behind a stone face. Your position gives you prestige and poor people have a high respect for prestigious people. These people behave and speak in a way that makes them distancing common people. There is no will of listening to others when you are fully occupied with listening to yourself. There is no will of seeing others when you are fully occupied with polishing the image of yourself.

The clean slate, the tabula rasa, is thrown away, hidden in the closets of history, covered with dust and spider webs. In the old days a leader of a country was supposed to be highly educated. He should have studied several languages, political strategy, history and philosophy. The purpose of history as a subject is to learn from it. We study history because if we know our past, we understand our present and can influence our future. This is helping us to avoid already done mistakes. We should study philosophy to understand both ourselves and others. We broaden our way of thinking and get to understand how people think and why. This is helping us in our communication with other people and that will help us to avoid misunderstandings and conflicts.

Next year it is time for election again, let us be better prepared and do better this time. Let us vote for a president who truly loves the Gambia, and who is able to see what will benefit us all. Being a president comes with a lot of responsibility and it takes maturity to be able to cope with that. It also takes a lot of maturity to surround yourself with the right kind of advisors.
Start a new chapter in our history book, you have got the chance to do something good. Do it!