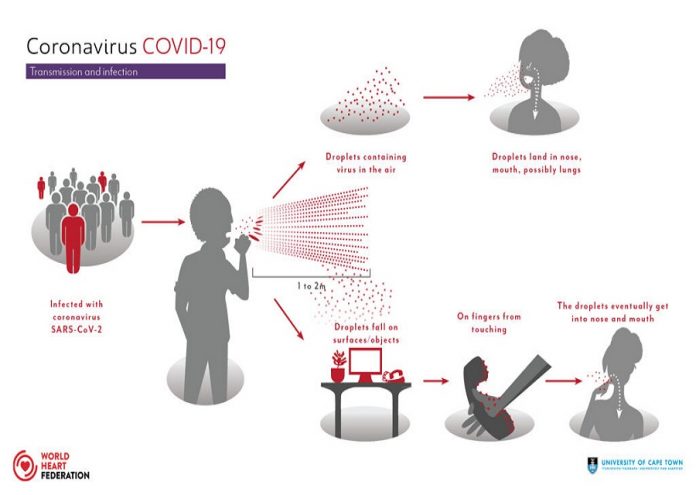 The 2016 impasse – Yahya Jammeh’s ploy to stay in power – which was at the time a special political science debate that hit the country – attracted so much attention that almost everyone became a political scientist overnight.  The ongoing corona virus pandemic (Covid-19) is seemingly commanding the same type of cynosure, although in a morbid way, that almost everyone has become a medical/paramedical expert in the last few weeks.

The clash of expert opinion in the field of medical science is also in full view today.  The difference is that, now, less than precise notions can mean life or death.  At stake then was the ill-gotten state/future of an ill-gottener/killer to become king/emperor head of state; at stake today are the lives and livelihoods of millions.  It was fun then; it is horrifying now.
A key aspect in which opinions differ among experts, pertains to the mode of transmission of Covid-19.  Does the virus get transmitted by droplets or through flying in the air/airborne?  The distinction and the frame by which it is communicated are crucial:  on it depends the meaning of how people behave and take precautions to avoid being infected.  State regulations do influence individual and social behaviour, but their effectiveness can be either hampered or reinforced by what people know.

The World Health Organisation (WHO) maintains that transmission of the virus happens in most, if not all, cases by droplets.  Based on this scientific brief: “According to current evidence, Covid-19 is transmitted between people through respiratory droplets and contact routes.”

Droplet transmission occurs when a person is in close contact (within 1 meter) with someone who has respiratory symptoms (i.e. coughing or sneezing) and is therefore at risk of having his/her mucosae (mouth and nose) or conjunctiva (eyes) exposed to potentially infective respiratory droplets.  Droplet transmission may also occur through fomites in the immediate environment around the infected person.  Therefore, transmission of Covid-19 virus can occur by direct contact with surfaces in the immediate environment or with objects used in the infected person (stethoscope or thermometer).

“In the context of transmission, airborne transmission may be possible in specific circumstances and settings in which procedures that generate aerosols are performed (i.e. endotracheal intubation, bronchoscopy, open suctioning, administration of nebulised treatment, manual ventilation before intubation, turning the patient to the prone position, disconnecting the patient from the ventilator, non-invasive positive-pressure ventilation, tracheostomy and cardiopulmonary resuscitation).  In an analysis of 75,465, Covid-19 cases in China, airborne transmission was not reported.”

Not all experts are satisfied with the way this knowledge is being propagated.  A certain Dr. Milton who reportedly is an infectious disease aerobiologist at the University of Maryland’s School of Public Health in the U.S., disagrees.  He says, “I think WHO is being irresponsible in giving out that information.  This information is dangerous.”

WHO’s advisory suggests that “droplets can only travel short distances through air and either land on people or on surfaces that people may later touch.”  This is the basis for the hygiene protocol that urges people to “wash their hands frequently and not touch the face, because that could bring the virus into contact with the nose or mouth.”

However, WHO acknowledges that airborne transmission might be possible “in specific circumstances and settings in which procedures that generate aerosols are preferred,” and recommends “airborne precautions” when medical workers do those procedures.  Milton is far from convinced, arguing that being a new virus, it is not appropriate to draw conclusions about how it is transmitted.  I don’t think they know, and I think they are talking hats, he says, adding: “The epidemiologist say if it is close contact, then it is not airborne.  That’s baloney.”

The Centre for Disease Control and Prevention itself, a specialised agency of the U.S. Department of Health and Human Services, cautions the American public that “Covid-19 is a new disease and we are still learning how it spreads.”

My own layman interpretation of what is going on (which is immaterial in discussions as technical as these) is that if a bird’s feather can fly in the air for extended minutes (depending on which way the air is blowing), there is reason to believe that the virus, riding on extra light, almost invisible particles, can stay in the air for hours.  In that case, even face masks, for as long as air can pass through them, provide little security and can even be treacherous in their offer of protection.  There is greater danger in staying indoors where the air, constantly whipped up by ventilators and air-conditioning systems, allows the virus to float freely, than staying outdoors, where there is less concentration of the virus and hence also the probability of catching one is less.

The death in Italy of more than 40 medical doctors, in the United Kingdom of about 20 doctors and elsewhere in the world of more than 30 medics and other health care workers (who undoubtedly were aware of mandatory precautions that must be taken under any situation) highlights the notion that many things about the disease are still unknown.  The escalating deaths in the U.S. are a major cause for concern.  It is also an up vote on Milton’s warning that there is risk in prescribing for something about which little is known.
WHO’s scientific study was based on an analysis of 75,465 covid-19 cases in China.  It was not only a large sample size, but practically the whole universe (as statisticians would say) because the reported cases in China appear to have settled at less than 82,000.  A sample that eliminates error in representation is always a researcher’s dream, except that the process of sorting out data sets of that size normally requires months, if not years, to finish.  WHO completed the study in 9 days, from February 16 to 24, 2020.

The need for commitment
When this coronavirus 2019 (covid-19) pandemic is over, the world will be a better place to live in.  People all over the world would have become more compassionate, charitable and caring for one another.

The world has become a small community where everyone is concerned for the welfare of everyone else.  “Any man’s death diminishes me because I am involved in mankind and therefore never said to know for whom the bell tolls; it tolls for thee,” the English poet John Donne (1572 to 1631) wrote.

Doctors, nurses and other healthcare workers (HCWs) are the real heroes and heroines in the fight to contain the novel pandemic.  The state owes them a very special recognition.
Meanwhile, WHO is facing a mounting backlash over the handling of China’s cover up of coronavirus.  WHO leaders, including the Director General, Tedros, the first politician and non-Medical Doctor to head the  organisation, are accused of running interference for China’s propaganda to absolve the communist nation of responsibility for the global spread.

WHO is under increasing pressure from health experts, the African Group and the KING Trump Administration for a job-not-well-done and concerned African Group for not scolding the Chinese government for casting a very serious racial slur on Africans in China.
All of us want to improve in life through self-improvement and hard work.  The enemy is not the other class, neither the one with a divergent view nor the other race or tribe.  The enemy is a virus that is deadly however unseen.  We should not fall into the trap of obsessing into what we are not getting and resenting others who have it.  Instead we should focus on ensuring that everyone has enough information, adequately prepared in conformity with pronounements and has enough in store as we sit out these trying times.  May Allah (SWT) be with us. Ameen.