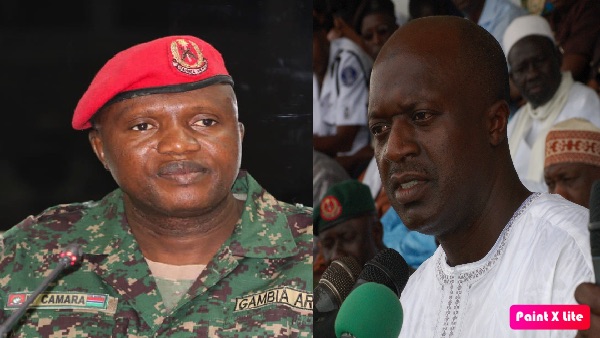 Major Wassa Camara, one of the soldiers imprisoned for attempting a coup in 2006, has alleged that former army chief Lang Tombong Tamba was initially part of the coup but pulled out after he had a difference in choice with Ndure Cham over who should be the president if the coup succeeded.

Major Camara said Ndure Cham had confessed to him that he wanted a civilian-led government while soldiers go back to the barracks but Tamba wanted the soldiers to take center stage and rule which led to their differences.

Major Camara further alleged that Peter Singhatey was also part of the plot but he too fell out with Ndure Cham over his choice of a civilian leader.

“Ndure Cham told me that he had fallen out with Tamba and Singhatey because he chose that a civilian (Alieu Jobe) should be president but they were not happy with that and decided to leave,” Major Camara told the TRRC in a marathon testimony yesterday.

He said when Ndure Cham realised that the duo had quit, he suggested that Singhatey’s brother Edward be arrested after the coup.

He narrated that whilst they were at the airport to launch their assault, Tamba who was Ndure Cham’s deputy at the time, informed the men in uniform that they should arrest Ndure Cham anywhere he was found for his attempt to remove Jammeh from power.

“It was not normal in the military for a junior to call for the arrest of his senior. So the action of Tamba was not what is known by the military or military culture,” Major Camara added.

According to him, Cham intimated to him that the coup was justified on former president Jammeh’s blatant violation of the law, promotion of tribal sentiments, abuse of office and rise in corruption.

He explained that the task given to him was to go to the earth station in Abuko where he will meet one Mr. Njie to give him all he needed to be able to shut down all communications in and out of the country.

Camara also revealed that Ndure Cham disclosed to him that he has the support of cabinet ministers, Gambians on international appointments, soldiers and the international community but he did not disclose any names.

Tortures meted out to him

Testifying further, the witness said he was arrested shortly after the coup was thwarted and detained at the Mile II prisons and the NIA, where he underwent severe beatings and other forms of torture by the members of former president Jammeh’s hit squad, the Junglers.

According to him, from the day he was arrested and taken to Mile 2 till the day he was released, it was full of events as some of them were taken to the NIA for questioning where they were coerced to confess responsibility in the attempted coup.

“They surrounded me and started questioning what role I played in the coup. They said I should confess that I was the ringleader of the coup but I refused and the person sitting behind repeatedly slapped me and said they will blow my head if I refused to accept what they instructed,” Major Camara recalled.

The witness disclosed that he was forced to change his statement as they were instructed to put that they were part of the coup and asking for forgiveness from the head of state.

“The other time I was taken to the NIA, we found some women roasting meat but by midnight, we were asked to leave. A Jungler Malick Jatta stood up and asked whether I remember training him in Farafenni and pointed his pistol to my head, saying he will treat me as an enemy. The Jungler also asked W02 Alpha Bah why we were against them but Bah told him that it was destiny. Malick Jatta and Amadou Badjie alias Chairman took me outside with my hands cuffed and started hitting my head on the wall after which sticks started to rain on me. I had lacerations all over my body and I couldn’t get up and two people had to come out and help.” Camara also alleged that one Omar Colley, called Jah Guide, who is still serving in the army, had wreaked havoc on him and fellow detainees at Mile 2 prisons, by making them and their families as uncomfortable as possible.

Meanwhile Gen. Lang Tombong Tamba has categorically denied that he was ever part of the Ndure Cham coup. Contacted by The Standard for comments on the allegations, General Tamba said it was public knowledge that he was the one who stopped that coup.

“If, as Major Wassa Camara said,  I opted out of the coup because I preferred a military rather than a civilian to take over, as head of state, is it not logical that I would have myself gone ahead to take over since I had the power to do so? No one would have stopped me from taking over if I had been part of the coup and wanted a military man to lead it. I would have gone ahead to declare myself leader since I had the power then,” Tamba said.   He said he was never told about the coup because the plotters had always believed that he would not support it.

On the allegations that he was present at the panel where Camara was interrogated and allegedly tortured, Gen Tamba said there is ample evidence at GRTS to show that during their interrogations, the coupists were paraded on TV unscathed and in good shape explaining their roles in the coup. “Everyone who watched that tape knows the full truth that they were not touched or harmed. If, as he claimed they were taken from their cells and tortured at night by Junglers, then of course I had no control over that because as he himself said, the Junglers were more powerful than anyone in the army,” Tamba said.