The Ecowas protocols and our checkpoints 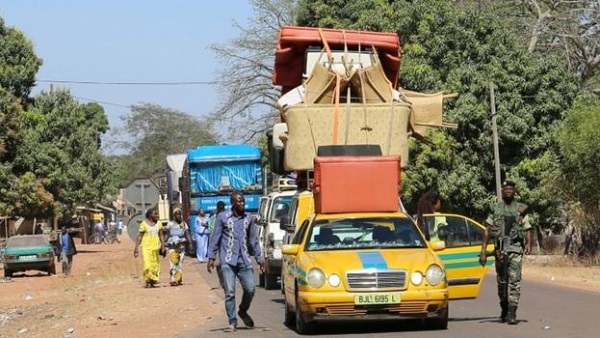 Security is one of the most fundamental prerequisites for development. There is a need for stability and security for there to be any form of development in a nation.

rue peace and stability though is not only guaranteed by the presence of numerous security agents but also working on the needs of the people, especially in the area of food security and ensuring economic justice.

One of the ways to attain this is guaranteeing freedom of movement of both people and goods.

The Economic Community of West African States (ECOWAS) has recognized this and in one of its protocols has made this a cornerstone of the integration of the states geared towards making it an ECOWAS of people rather than that of states alone.

The importance of free movement of people and goods in the development of a nation cannot be overemphasized. In The Gambia though free movement is a huge problem as there are just too many police and army checkpoints.

The fact that an individual traveling from one part of the country to the other is stopped so many times wastes a lot of time and thus causes huge economic losses.

I just returned from a trip to the hinterlands and experienced firsthand the troubles – or shall I say the trauma – ordinary Gambians sometimes go through while traveling for various purposes from one part of the country to another.

From Jarra Soma in the Lower River Region to Brikama in the West Coast Region, I encountered fifteen checkpoints (police and army). In almost all these, we were stopped and told to produce our documents.

Those who didn’t have their ID cards on them were told to alight and were only allowed to continue after giving some money to the officials.

The case of one particular young man remains in my mind. The young man was in the same vehicle with me. He is nineteen years old. When we reached Mandinaba, an immigration officer asked him for his ID card.

The young man replied that he doesn’t have one because when the issuance of ID cards was stopped by the government, he was not yet eighteen and since its resumption, he has not been able to obtain one (perhaps due to the difficulties involved: inadequate depots, high cost, verification of nationality and so on).

The officer insisted that he alight and he was taken to the office where he gave them some money. It was only then that he was allowed to continue on his journey.

This was interesting as I could not see the point. The young man boarded the vehicle in Brikama and was going to Kalagi (within the country) there was therefore no need to do this.

Again, while I was coming back, I observed something else which to me, was completely ridiculous (perhaps due to my lack of knowledge about law). A Senegalese gentleman working and residing in Brikamaba was in the same vehicle. He was going to Brikama.

At one place, when he showed his documents (Senegalese), he was told to alight. He was taken to the office and compelled to pay fifty dalasis (D50) as Laissez-passer

My learned friends in the law should help out here. A man residing in The Gambia and going from one town to another is made to pay laissez-passer to allow him enter the country – the man is already in the country for heaven’s sake!

One wonders therefore if The Gambia is complying with the ECOWAS protocols. These are the issues that should be addressed as soon as possible. When some passengers raised concerns over the issue, some other Gambians blamed it on both sides stressing that Gambians go through the same thing in Senegal.

I, a frequent traveler to Senegal, have never witnessed such behaviour among their security officials. Perhaps it is happening but I have not seen it apart from one fee that one pays at the border post.

Besides, I have been in Ghana studying for three years, traveling throughout that country’s ten regions, and not even once have I ever been asked for documents. And we can’t say that we have more stability and security than those countries?

What exactly are the checkpoints serving in this country if not to breed fertile ground for corruption?

Police officers – or some of them – receive bribes and allow defaulting drivers and other violators to go on. We observe sometimes cases where someone has violated the law and nothing is done to him or her. Is this due to lethargy or corruption? One can never be sure.

As I have said repeatedly, I personally think that to some extent, the poor renumeration and inadequate tools for the police force go a long way in contributing to the performance of the police.

As security is of extreme importance, the police – who are charged with the maintenance of law and order, should be well equipped and well paid. Perhaps this will ward off efforts to bribe them and enhance their professionalism.

It is true that the presence of checkpoints helps in maintaining peace, law and order but need they be this many? Can’t there be strategic locations in which to have them?