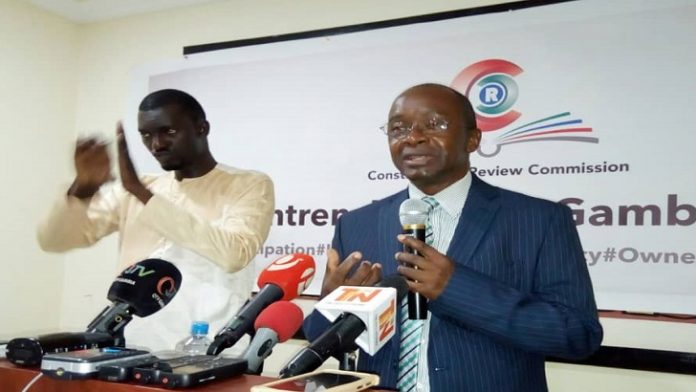 It is high time that all Gambians become acquainted with 1997 constitution of The Gambia, a highly defective document that we willingly subject ourselves to with little alteration. With the exception of a few recent amendments, the supreme law of the land is something that Yahya Jammeh created and handed to us.

The above fact should be of no small concern to us. Jammeh’s government was diligent about what clauses became part of the constitution. It discarded key recommendations from the consultative commission tasked with coming up with recommendations for the-then new constitution. In other words, the choice of what clauses to exclude and include was made with great deliberation and care. For Yahya Jammeh was a pure autocrat and a dictator and therefore did not tolerate any clause in the 1997 constitution that constrained his power. To the extent that any trappings of a democracy such as national assembly, judiciary or periodic elections made it into the constitution, he ensured that they were accompanied by corresponding clauses or modifications that neutered their effectiveness.

Take the case of the Supreme Court. According to the 1997 Constitution, the Court’s justices are to be appointed by the President. The National Assembly has no significant role. This means that the president can appoint and remove the Chief Justice and other judges of the high court at will, with perfunctory consultations.
This means that The Gambian Supreme Court can only provide a check on the presidency if it pleases the president. Put differently, the Supreme Court under this current constitution is nothing but an ornament. It has no power to provide a check on any excesses by the president because it was not designed to do so. If president Barrow were to dismiss the Chief Justice today for a ruling that he did not like, such a decision would be inappropriate but it would be a losing argument in today’s Gambia to claim that it is unconstitutional.

In effect, the president controls the agenda of the National Assembly through his power over the appointment of the speaker and the deputy speaker, whether or not he is aware of it. President Barrow has not found it necessary to exercise those powers because he has not so far had a reason to do so. Does anyone doubt that President Barrow would replace the speaker if a group of NAMs were to convince the speaker to table a No Confidence vote?
In the democracy we imagine to be living under today, the presidency, the National Assembly and the Judiciary are three separate but equal branches of government. This is a key feature of a constitutional democracy that embodies checks and balances necessary to prevent autocratic rule. But our current constitution puts the presidency far above the other two. This was no mere accident. This feature of our constitution is by design because it was created under a dictatorship.

This is particularly evident in how our constitution legitimizes problematic laws that have no place in a democracy. Take for instance the Public Order Act. This amended act includes provisions that should never be allowed in a democracy given that it restricts rights such as the freedom of expression and assembly – freedoms that should be fundamental in a democracy. Many people thought that this act would be removed when the current government took over. In fact, the Institute for Human Rights and Development in Africa (IHRDA) filed a case against this law in 2018 because of its contravention of the African Charter on Human and Peoples’ Rights. Guess what? The Supreme Court of The Gambia considers this law to be constitutional.

Another important point is the role of the Gambian armed forces in the 1997 constitution. Because Yahya Jammeh wanted not only to rule the country but to control the economy, he ensured the presence of a clause that permits the Armed Forces “to engage, at the request of the civil authorities, in productive activities, such as agriculture, engineering, health and education for the development of The Gambia.” In other words, he wanted as wide a latitude as possible to use the military domestically to his personal ends when it suited him.

This clause created the veneer of constitutionality for the army to tend to his personal farms in Kanilai and numerous other locations for instance. Now, the Chief of Defense Staff is using this same clause to justify the dubious agreement between the army and an American agribusiness company to engage in commercial activities. If the army is to engage in agriculture, engineering, health and education, what are the role of those sector ministries and agencies? What expertise can the military bring in these areas given its limited capacity to even carry out its basic role?
Naturally, we should be referring to our constitution to resolve questions about legitimacy of laws or defining the proper roles of institutions. By now, it should be obvious this is not possible today in Gambia. To assess in today’s Gambia the constitutionality of laws or appropriate roles of institutions under a constitution created by a dictator is contradictory and leads to incoherence. A literal interpretation of our current constitution legitimizes far too many things that are simply inconsistent with democratic principles and norms. Consequently, as long as the unaltered 1997 constitution is in effect, it is a fool’s errand to litigate the constitutionality of the numerous problematic laws that were enacted under Jammeh and are still in effect.

I am aware that the Constitutional Review Commission (CRC) is already working on the process that will lead to a new constitution. However, there are lots of glaring defects with the current constitution that need to be removed in the meantime. The CRC consultations should be done diligently without any rush, which means the process could take time. The removal of those defects is not difficult and will not interfere with the work of the CRC. It will simply ensure that the transitional period we live in is actually a democracy. There is no reason why those clauses cannot be addressed with the same urgency as changing presidential age limit.