The Gambian Association in Oslo, unveiling Gambia in the diaspora 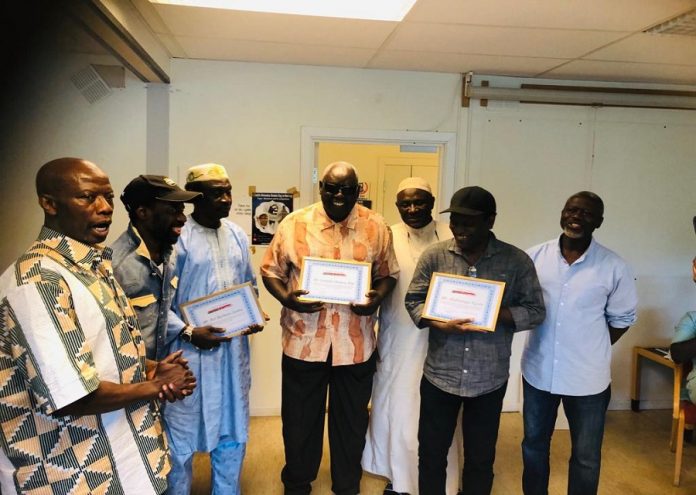 The Gambian Association in Oslo, Norway recently concluded this year’s edition of their Cultural Week, an annual event which this year awarded four prominent Gambians.

The four were unveiled at the festival and decorated with various insignias in recognition of their contribution to Gambian history.

The musicians took along Kebba Taylor, son of the late legendary pianist Seneme Taylor and together they rekindled memories among the elder members of the association and guests who were filled with nostalgia.

History
The Gambian Association in Oslo was first established by a group of Gambian seamen in 1972 who found it necessary and useful to organise as way of enhancing and securing their welfare in Norway.

Over the years the association expanded with the influx of Gambians to Norway in late 70s and early 80s.

Cultural week
The Cultural week started in 1986 and this year marked the 33rd anniversary.

It is an annual event organised to showcase and promote Gambian culture, art and music in Norway, and at the same time to enhance the integration of Gambians in the country.

The event also provides a good platform to foster and enhance collaboration between the Gambian diaspora in Norway and the government of The Gambia.

In previous years, various Gambian dignitaries and officials have graced the occasion, including High Commissioners in London, government ministers and officials of The Gambia Tourism Board.

The Association collaborates with sister Gambian organisations in other Scandinavian countries to strengthen the bonds of sister/brotherhood and friendship.

”We have over the years contributed our quota in profiling the Gambia, her people and culture, which has undoubtedly made the Gambia known to many Norwegians and Scandinavians.

Our cultural week provides a unique ground for reunion of friends, family members and relatives.

People come from afar to grace the occasion and we try our best to involve everybody with specific attention given to the children and youths,” said Omar Drammeh, secretary to the association.

The Cultural Week has over the years attracted many Gambian artists and groups, including Jaliba Kuyateh and the Kumareh Band, the late Alagie Nying and Sirra-Begay Nying, Musa Ngum, Pencha B, Singateh Rejoice, Jalex, T. Smallz among others.

A major highlight of this year’s event is that music icons and legends of former Super Eagles and Guelewar bands who were household names in The Gambia participated at the event.

Their stage performance rekindled fond memories for the older generation here who have seen these groups performed in the 60s and 70s.

The Gambian Association honoured members of the group; Bai Janha, Oussou Njie Senor and Abdel Kabir Lie Ngum with an award, for their outstanding contribution to Gambian music and culture.

Other activities (Scholarhip programme)
The association has also been involved in other activities, which are geared towards enhancing the welfare of Gambians.

”This we do by way of providing access to education, supporting initiatives that uplift the livelihoods of those who need it in the Gambia and collaborating with African diaspora organisations to work on issues of common interest and concern.

We have sponsored students at the unviersity of The Gambia who have all graduated in the fields of tourism, law, management, medicine and biology. We have also in the past sponsored over twenty students at different secondary schools across the country,” Mr Drammeh revealed.

The association has also financed the construction of a classroom block at Albreda in the Niumi district and donated books to the Gambia National Library as well as contributing to the government’s disaster relief initiative.

Besides the education sector, the association has also donated cash and footballs to the Gambia Football Association (GFA)
Mr. Sheik Tejan Nyang, Head of the Institute of Travel and Tourism of The Gambia, has been instrumental in coordinating these initiatives on the ground in The Gambia.

I know you're thinking we've gone through here before. Yes it's Westfield Junction again in all its pomp and glory! You will notice some...
Read more
Essays

The dilemma of the immigrant parent

Why we need a truth and reconciliation commission