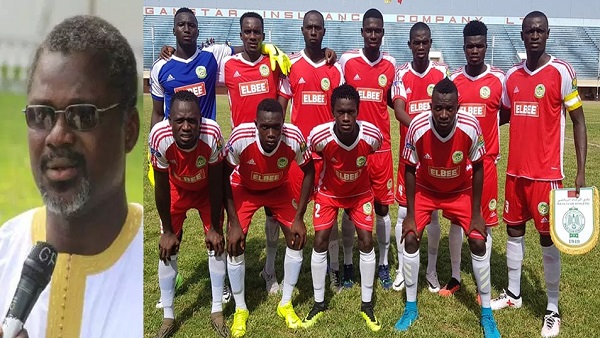 Momodou Bojang replied after Raja took an early lead and again fired an Adama Sabally long ball, when he quickly out ran the entire Raja defense before his touch left the goalkeeper in no man’s land and smashed in an empty goal to make it 2-2.

Adama Manneh eventually made it 3-2 for Brikama after his delightful low effort passed Raja’s goalkeeper just before the break.

But that was when Raja bounced back with a goal just five minutes into the second half to make a 3-3 so far on aggregate but Raja of course has the 3 away goals.

The second leg is in Morocco on the 23 August.

Brikama needs to win in Casablanca to take the tie and according to club officials this is not beyond them. ”If our team can score three times against Raja, there is every reason to believe that they can score again. Our focus should be to avoid taking goals in Casablanca,” one official said.

Meanwhile Brikama United have called on the Gambia Football Federation to do more.

”We are appreciative of the D250,000 cash and kind they gave us but again they can invoke their partnership with the Moroccan FA to facilitate our lodging which can save us from a budget of over D400,000. Remember we are also to cough up D1.5M in air tickets.

The GFF should help us again by arranging the accommodation since they have a relation with the Moroccan FA which is often extended to national teams.

Brikama United at the moment is representing Gambia.

Besides the money budgeted for Gambian clubs in Caf is not exhausted because Real De Banjul is not taking part, meaning only Brikama United is representing The Gambia.

What is stopping them from giving us the already budgeted funds for Real de Banjul?,” one club official begged in anonymity.