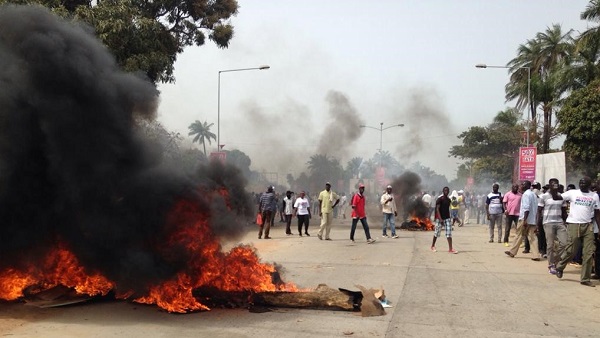 Growing up in culture and environments where our parents taught us not to disrespect lawful authority. As a former student of Armitage, I faced the same ordeals during my days at Armitage. Although every Armitage student’s experience differs, the culture of discipline and seniority is something that the school promoted to ensure there is order and stability in the school. I am proud to say Armitage shaped my life in many ways the benefit is far greater than the punishment I experienced in the hands of my seniors.

We live in a world now where I don’t care attitude is a standard occurrence in our society. I cannot comprehend the myriad of attacks by the civil society organizations at our national law enforcement officers since the 26th January 2020 violent protest. Why has it become so likely to bash and disrespect people that risk their lives every day to serve and protect our communities?

I spent most of my childhood days in the hands of law enforcement officers. My father was the one who fought to ensure Brikama-ba have a police station due to frequent criminal activities. With the help of Uncle Ebrima Chongan, the then Deputy IG of police, Brikama-ba was able to have a police station. I have witnessed how far our law enforcement officers go to make sure we are safe while risking their lives. Additionally, two of my brothers, the late Mawdo Jawara and Chief Inspector Ansumana Nanko, who is still serving in the police. Both of my brothers wear their police uniforms with pride, and they are peace-loving people, who want to serve their country to make sure our communities are safe.
My advice to our law enforcement officers particularly the police it is now high time for you to form a very strong police union with a strong legal team that will equally fight, protect and defend your interest, remember your vote matters too.

What I have observed our generation has lost respect for authority generally. We talk back to our parents, we expect rules don’t apply to us and that we think we are entitled to everything. Having that mindset, people hate people who are enforcing laws and getting them in trouble for wrongful actions; but that must change and it must change now.

As we advocate for security reforms, we equally need to reform all the civil society organizations in the Gambia to make sure they are impartial to restore public confidence.
There must be mutual respect between citizens and enforcement officers. Belittling officers and inspiring the stigma against law enforcement only increases the relentlessness of unease between citizens and police by forcing officers into defensive positions. Although there is no doubt that some officers abuse their position of power, but despite the low salary, the overwhelming majority of officers work their hardest to assist maintain safe and law-abiding communities. With this in mind, citizens and police have a shared responsibility to their communities.

Police officers do not make laws they have an obligation and a duty to enforce laws, they have no business to judge what is good or bad laws, once the National Assembly passed laws, they must enforce it. Therefore, if citizens have problems with a particular law, they must address those grievances at their National Assembly members, not the police.
It could be recalled that former Vice President Lawyer Ousainou Darboe and also the leader of the United Democratic Party (UDP), as reported by The Standard in November 2017, that UDP alongside with string of his party militants had filed lawsuit before the Supreme Court seeking for the court to determine the constitutionality of the charges of unlawful assembly, riot, holding a procession without a permit and disobeying an order to disperse from an unlawful procession. They further sought the court to declare these laws null and void and accordingly strike them out of the statutes for their inconsistency with the constitution.

The Standard newspaper reported that after the judges had evaluated the issues formulated by the plaintiffs in their case who claimed that the exercise of a right given under Section 25 of the Constitution should not be subjected to the approval of the Inspector General of Police as provided in Section 5 of the Public Order Act, the Chief Justice said: “The restrictions on the exercise of a right is not an abolition of that right.”
He said the power of the IGP to issue a license or deny the same does not have any effect on the constitutionality and validity of Section 5, adding that the requirement for a license is not inconsistent with the Constitution as claimed by the plaintiffs.

On the challenge of Section 69 of the Criminal Code, the court said that the wrongful use of the law in a charge does not amount to unconstitutionality. Accordingly, the court said the claims of the plaintiffs were dismissed in their entirety.

I still cannot understand, even after the Supreme Court declared the Public Order Act lawful, people still do not want to respect it. The constitution mandated the court to deal with cases and controversies when the Supreme Court rules on a constitutional issue, the citizens must respect its verdict; Supreme Court decisions can be altered only by the procedure of constitutional amendment or by a new ruling of the Court. Where there is a law, there should be order, and with order come a lot of blessings. It is very crucial that everyone learns to respect the law and identifies its importance in ensuring that everyone lives a happy life that is comfortable. Our leaders have an obligation to protect our society by giving them the right advice.

The citizens have a responsibility to teach themselves about the laws and respect the authority that enforces them. Therefore any acts aimed to insult and sometimes harm enforcement officers, citizens are also failing their responsibility towards their community. Stop blaming the police about the Public Order Act, it is not their making and they cannot repeal it. Confront your Members of Parliament to repeal it, and if you are aggrieved by the way the police enforced the laws, go to the court for redress. Putting the law into your hands is a provocation of the law enforcement officers.

The media is partly liable for society’s inability to acknowledge the police as regular people. Most news stories that include police are about horrifying events that don’t represent the profession as an entirety. Those that read and watch these news stories must confine minds that the media only recounts stories of rare events and mistakes. The civil societies don’t specialize or may I say, they careless in stories that provide a more accurate portrayal of the police because that’s not considered news.

The government must empower and protect the police in the line of their duties they must not tolerate these acts of disrespect against the police and therefore the citizen-versus-police mentality. The longer the government allows this, the more it alienates a profession that works to support and protect communities. To vary this prevalent attitude, people got to actively support the police. People should spread the stories they hear of officers going beyond expectations when serving their communities because those are the stories that the media won’t cover.

If there’s a situation where people are vocalizing hatred for the police or blatantly disrespecting them, it’s important to point out support for the police both as public officials and as citizens. The overwhelming majority of police are people that want to serve and protect their community for a living, which sentiment should be honored.
The media and the civil society organizations in The Gambia will never balance the negative occurrences and positive actions of the police. This failure to accurately portray officers has allowed the general public to see law enforcement as a malicious establishment.

The Sunday violence protest and subsequent press releases from individuals, politicians and various institutions such as the Gambia Bar Association, displayed that people don’t treat law enforcement with equivalent respect they might treat other professions. No other profession would be greeted with an equivalent offensive behavior because an individual wore their uniform into an institution. Disrespectful acts against the police display a failure to acknowledge people within the profession first as human beings who deserve a minimum of an equivalent level of respect you will give to other persons.

Finally, I am appealing to the law enforcement officers to exercise mercy and drop all charges against Lawyer Yankuba Darboe and the rest of 3yrs Jotna executives for the sake of national reconciliation. I have the highest respect for our men and women in uniform and am a strong believer of law and order. It is rather very unfortunate some of our political leaders are the ones misleading their followers.