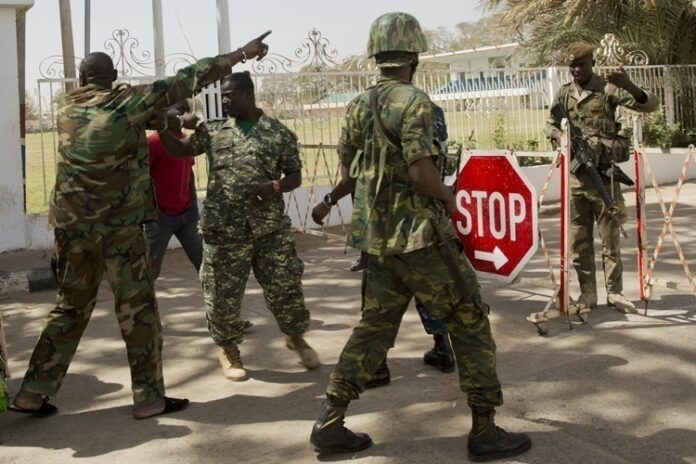 The legal advisers of Pres. Barrow must guide him to know, first and foremost, that he needs to obtain the approval of the National Assembly to bring, maintain and extend the presence of foreign forces in the Gambia. The Constitution states in Section 79(1)(c) that while it is the responsibility of the President to negotiate treaties and other international agreements, the conclusion of such negotiation is subject to the approval of the National Assembly.

The presence of foreign forces in the Gambia is a matter of international agreement. Hence the President must follow the constitutional requirements to make such agreements stand. Therefore, the decision by ECOWAS leaders to extend ECOMIG’s stay in the Gambia cannot stand until Barrow takes the decision to the National Assembly to seek their approval first. Failure to do so would be unconstitutional hence the presence of ECOMIG in the country would also be a violation of the Constitution which is enough grounds to impeach the President.

One would have thought that Pres. Barrow would have the good sense to first go to the National Assembly to seek their approval before going to ask ECOWAS to maintain ECOMIG in this country. That would have been a demonstration of a sense of responsibility, respect for the National Assembly and submission to the dictates of the Constitution thereby enhancing the good governance of the country. But disappointingly, Barrow failed to do the responsible thing.

Secondly I find no justification why ECOMIG should continue to remain in this country. There is no security issue of any kind to justify their continued presence. Rather ECOMIG’s presence undermines the security sector reform thereby endangering national security as a whole. The evidence of that lie in the fact that until now no security agency has reformed to any satisfactory level. Therefore, I totally disagree with the President when he told ECOWAS leaders that disarmament and demobilization of troops was an issue in the Gambia. I disagree with him further when he also said that the security sector reform process is ongoing.

Disarmament and demobilization take place in a country that underwent actual armed conflict or civil war in which the national army was shattered with armed civilians and rebel groups all over the place and guns littering the space. This kind of situation has never been our experience in the Gambia. There is no situation where small arms are scattered around the country in people’s hands as it was in Sierra Leone or Liberia which went through an actual civil war. Even with the impasse, the Gambia army remained intact as one body. Some soldiers did flee immediately the Tyrant left but they never posed a threat as there was never an attempted incursion from 2017 to date. Therefore, what justification does Pres. Barrow has to speak about disarmament and demobilization.

What is obvious is that both the political leadership and the military/security leadership of this country are not interested in security sector reforms. This is why apart from promotions of officers the very structure, culture and modus operandi of the military, police, intelligence and prisons among others remained essentially the same as before. Therefore Pres. Barrow needs to be honest and take the necessary leadership to insist on his security chiefs to make reforms a reality.

It is almost four years now since Barrow took office and still there is no review of the Police Act, the NIA Act, the Prisons Act, the Immigration Act, Drug Control Act, the GRA Act or the Gambia Armed Forces Act. Security sector reform cannot kick off without first doing a review of the laws that established the security agencies in the first place. At the same time there has been no review of the state of affairs in the respective security agencies so as to understand their challenges, conditions of service, welfare and their needs. Such reviews are necessary to modernize and professionalize these institutions and bring them in line with international standards for security agencies in a democracy. It is this kind of assessments that will identify instances of corruption, abuse and weaknesses so that solutions are proffered.

I recall that it was in August 2017 that the Gambia Government established the security sector reforms steering committee comprising ministers and ambassadors of international partners. The committee went further to set up a 27-member technical working group which they said was meant to carry out a comprehensive assessment of the security and justice needs of the people and the state as the basis for the envisaged security sector reforms. Where is their report? What is the status of implementation? Clearly the reality indicates that no change has taken place so far.

Then in May 2019 the President appointed the former Minister of Justice Tambedou to become the new chair of this steering committee of ministers and ambassadors. Tambedou had since left yet no one hears about what this steering committee had done or is doing. Apart from that, we also have the Office of the National Security. Nowadays, one hardly hears about that office or what it is doing. Therefore, how can Pres. Barrow stand before his colleagues to tell them that his Government is undertaking security sector reforms? More seriously, why would Pres. Barrow generate self-inflicting fears, imaginary scenarios and false information just to try to convince ECOWAS of the need for ECOMIG’s continued and unconstitutional presence in the Gambia?

I wish to therefore call on the President to withdraw his baseless intention to maintain ECOMIG in the Gambia. Rather he needs to go to the National Assembly to respectfully inform them that he has canceled the presence of foreign forces in our country. For that matter the Pres. Barrow should undertake security sector reforms more vigorously with seriousness knowing full well that the presence of foreign forces undermines his connection with his troops and his ability to perform his duties as the Commander-In-Chief. He needs to hold security chiefs by the neck to ensure that they deliver on reforms ASAP!

As citizens we must all raise our voices to demand both the President and the National Assembly to stand for the national interest by removing ECOMIG out of The Gambia ASAP.