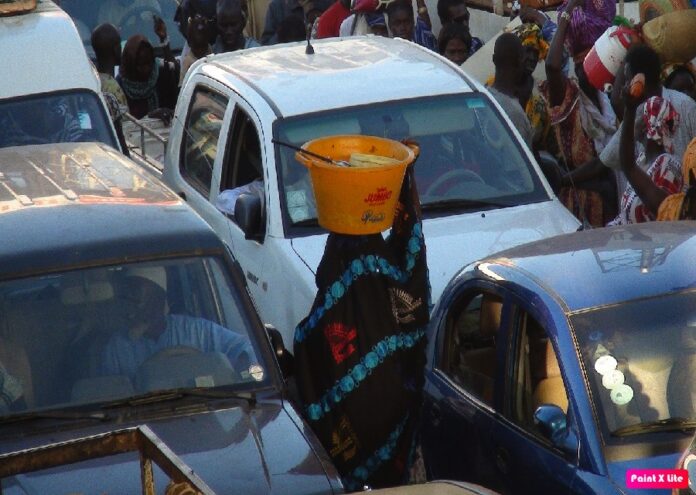 “In one of my letters published on October 24, 1996 captioned Sayerr Jobe Avenue Traffic nightmare, I stated that Sayerr Jobe Avenue is the main artery to the Kombos, Kotu and the Tourism Development Area. A flyover or tunnel from Kanifing to Bakoteh Bridge is now necessary. On the other hand, we can make traffic on Sayerr Jobe Avenue easily flow by upgrading the road to a four lane from Westfield to Serrekunda Market and from Bambo to Bakoteh Bridge. The bottleneck area should be cleared of all hawking and parking.

In order to enhance the easy flow of traffic, the traffic police should be supplemented with civilian traffic wardens whose main function should be to paste a non-parking ticket on the windscreen of any offending driver. These traffic wardens will have nothing to do with moving vehicles or drivers. All they have to do is paste the no parking violation sticker on the windscreen of any vehicle that parks at a no parking area.

These stickers are very difficult to remove due to their strong adhesive nature and are as big as an A4 size paper. They should also take a snapshot of the vehicle for evidence purposes. It will then be easy for the police to take it up to ensure that the stipulated fine is paid voluntarily within five working days failure of which the offender will be prosecuted resulting to the tripling of the fine. I’ll recommend a minimum of D500.

We appreciated the concerns and efforts of the Inspector General of Police Landing Badjie to minimize accidents and the involvement of Commander Kebbeh of Serrekunda station in trying to ease the flow of traffic along Sayerr Jobe Avenue which crawls at 2km per hour, costing motorists heavy fuel bills and time wasting. Like all metropolitan cities, efforts of the Police Force should invariably be complemented by uncompromising wardens, thereby leaving the police to concentrate on more serious matters”.

During my tenure as Mayor of KM, I had on several occasions during meetings brought the introduction of the traffic warden programme to be undertaken by municipalities in conjunction with the Police Force up to the point where traffic sign boards were to be produced. As we all know, traffic wardens are not members of the regular Police Force but assist the police in the prosecution of traffic violators.

Also, as Chief Scout Commissioner, I led the scout troop to the United Kingdom in 2007 that attended the 100-year Centenary Celebration of the Founding of the Scout Movement (1907). While in the U.K. I used my title as Mayor to visit the office of the Lord Mayor of London in order to have assistance to implement the traffic warden programme. I was referred to Northampton Council who were prepared to assist in the implementation of the project. Unfortunately, before any meaningful outcome from the U.K. was realized, not only was I fired as Mayor of KMC, I was also simultaneously fired as Chief Scout Commissioner by President Jammeh in October 2007.

In this letter, I wrote:

“My lord Mayor, please allow me to use this opportunity to thank you again immensely for initiating and supporting the creation of the ‘TECHNICAL ADVISORY COMMITTEE ON PLANNING & DEVELOPMENT’ in September 2008 to which you had appointed me Chairman. This Committee was composed of eminent members such as Hon. Fabakary Tombong Jatta, National Assembly Majority Leader; Architects; Consultants; Engineers; UTG etc. One of the recommendations of the Committee that was submitted to you on 5th January 2009 stated:

“That the Traffic Warden Programme be immediately instituted to address the chaotic traffic issues that beset the Municipality’.

Also in this same letter I wrote:

“When I was Chief Scout Commissioner, the scouts were involved in organizing yearly ‘Road Safety Campaigns’ covering the whole country, with traffic sign boards throughout the length and breadth along both river banks of the country sponsored by ELF, now TOTAL OIL Company. I do hope that this programme would be resuscitated’.

“Sir, since KMC will not expand land-wise, while population is phenomenally on the increase daily, resulting in the acquisition of more and more vehicles, we must address this congestion and care-free attitude of drivers that beset our congested Municipality that we are all experiencing and which is being aired over West Coast Radio twice weekly.

I am sure that in tandem with the infrastructural objectives of the APRC Government and with Hon. Bala-Garba Jahumpa (Action man) as Minister of Works, Transport & Infrastructure, we shall soon enjoy some mini-flyovers in some key strategic intersections in the not-too-distant future. Let me also herewith commend S.A.N.R.A. for their initiative in producing traffic Signboards’.

In consultations with the Police Force, Local Government Authorities should employ quite a number of youths, (males and females) as traffic wardens and for them to be fully trained by the Police Force. Their clear-cut roles are to attach a sticker on any vehicle that violates the laid down regulations such as parking wrongfully; blocking traffic-flow; not following ques; violations of traffic signboards etc.  They should be paired and equipped with mobile phones to communicate with each other as well as to record violations. I am quite sure that under the dynamic leadership of Inspector General of Police Mamour Jobe, these traffic wardens will perform their roles most effectively.

In order for this programme to be transparently and efficiently done, there should be  sign-boards installed in most streets; some streets should be one-way traffic;  road markings on some tar roads should be done so that those making a right turn, or going straight must follow especially along Kairaba Avenue, Sayerr Jobe Avenue, Bakoteh Manjai Highway, Bakoteh Sukuta road etc; traffic from Bakoteh towards Brusubi turntable need not stop at the petrol station in Sukuta  but should turn right  irrespective of what the traffic light indicates- same as at the Kairaba traffic lights junction etc.

There must be markings on tar road junctions where no vehicle should stop; in some streets, parking should only be allowed on one side of the road; certain minimum distances from junctions must be no parking areas; heavy fines for drivers not observing ques but instead drive on the wrong lane; trucks and buses that maintain to stay at the left lane of a dual way be prosecuted; trucks carrying sand that the wind spreads along the road as they move should also be addressed etc.

KMC lacks designated garages. One area that should be developed is the space at the tipper garage next to the Police station. There is enough space up to the main drainage area that can accommodate all the vehicles scattered at the highway opposite the police station.

There must be vigorous and continuous sensitization and demonstration programmes to implement this system.

Flyovers should be constructed at West Field Junction, Bakoteh Bridge and Manjai junction. The Flyovers for the Brusubi Turn-table and Kairaba Avenue traffic lights to be incorporated in the OIC road building project.

It is now very encouraging and pleasant to see that currently, the road from Sayerr Jobe Avenue towards Bakoteh is being reconstructed. However, because of the impact that is now being experienced clog-wise, we hope that the workers there will be working 24 hours in 2 or 3 shifts daily. Also, parallel streets to Sayerr Jobe Avenue should be improved to ease traffic flow.

The necessary legal requirements governing the implementation of this programme needs consultations and interactions across the board.

Your Excellencies, while looking forward towards your cooperation, support and participation for the realization of this programme,

Alieu Momarr Njai is the chairman of the Independent Electoral Commission

Do or die: Top ten reasons why you should take a COVID-19 vaccine