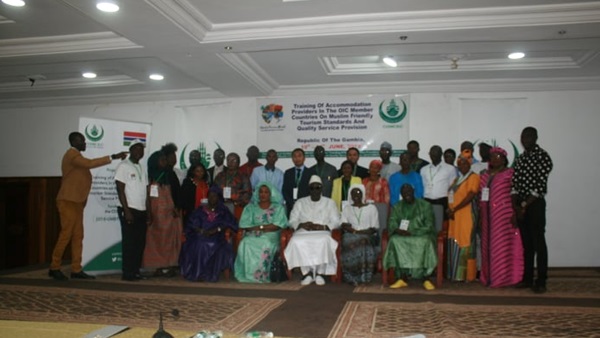 The training is targeting accommodation providers in The Gambia and in other OIC member countries in the sub-region. The programme came as the country prepares to host the Organisation of Islamic Corporation Summit in 2022.

The goal is to enhance the skills of the hospitality stakeholders on Muslim-friendly tourism standards and quality services provision and create open platform for the exchange of ideas and latest hospitality management trends, according to organisers.

In her opening remarks at the programme, the permanent secretary, Ministry of Tourism and Culture, Cordu Jabang-Senghore, said the key objective of the training is to help The Gambia as a destination to comprehend the concept of Muslim-friendly tourism and its components, and to facilitate the exchanging of ideas, opportunities and challenges in developing and marketing Muslim-friendly standards.

She noted that Muslim-friendly tourism is “no doubt the striking new and big phenomenon yielding worldwide valuable opportunities” for the tourism industry.

The permanent secretary reiterated her ministry’s resolve in harnessing the best innovative pportunities in understanding and appreciating the requirements and fundamentals of the global market in Muslim-friendly tourism without hampering the convenience of non-Muslim custumers.

She called for greater collaboration and solidarity among OIC members to realise goals in the fight to alleviate poverty.

The director general of the GTB, Abdoulie Hydara, described the role of accommodation providers as “critical” to the success of the 2022 summit.

He stated: “Key to successful management of tourism invariably lies in the capacity of destination stakeholders to continue to adapting to constant dynamisms and new trends in the sector.

Abdoulie Touray, board chair, GTB, called for the establishment of Muslim ‘halal’ hotels in the country, positing that Islamic finance and economics, denoting “purity sharing and caring” is gaining attraction and has now become a mainstream of all activities of human endeavour.

Muslim-friendly tourism, sometimes referred to as Halal tourism, is a subcategory of tourism which is geared towards Muslim families who abide by rules of Islam.

Malaysia, Turkey and many more countries are trying to attract Muslim tourists from all over the world, offering facilities in accordance with the religious beliefs of Muslim tourists.

September 21, 2021
Dear editor, The IGP Abdoulie Sanyang must realise that he is not the King of The Gambia nor the General Counsel of citizens such that...