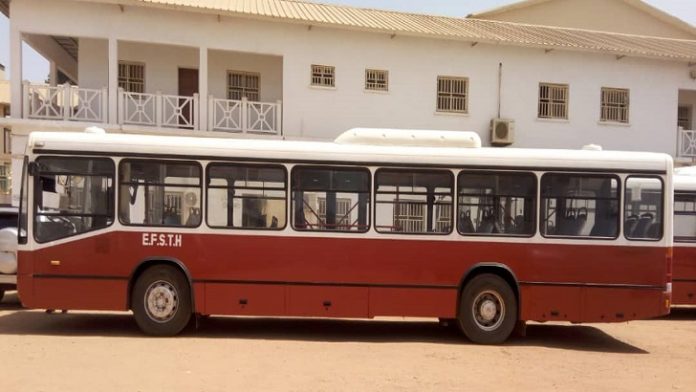 The Government of The Gambia on Thursday donated two new buses to the Ministry of Health for the Edward Francis Small Teaching Hospital(EFSTH)through support of the Turkish Government.

Health minister Dr Ahmadou Samateh said the buses are meant for transporting hospital workers to ease delay at work.
Hospital spokesperson Kebba Sanneh said the support is timely and thanked the ministry and the Turkish Government.

Dr Adama Sallah, the chairman of the hospital’s board of directors, said the two buses will significantly help in ensuring that workers get to work on time and ease the transportation problems.

He also thanked the Turkish Government for their support to the hospital. Sallah said the hospital management was working on purchasing two new buses for the staff.
DrAhmadou Samateh, the Minister of Health said the buses were donated by President Adama Barrow to EFSTH to alleviate the challenges encountered by staff members while going to work.

He maintained that it was important for health care personnel to report to work on time, saying, “the government hasn’t forgotten the staff of the hospital and this support is a demonstration of one of them. We will continue supporting the hospital,” he said.
“We want to reassure you that this is the beginning and a lot more good things will come to EFSTH and the entire health sector in the country”, he said.

Rohey Malick Lowe, mayorof Banjul thanked the Turkish Government for providing the buses and President Barrow for facilitating the provision of the buses.
“We need more. Two is not enough. We are still looking forward to having two more,” she said.