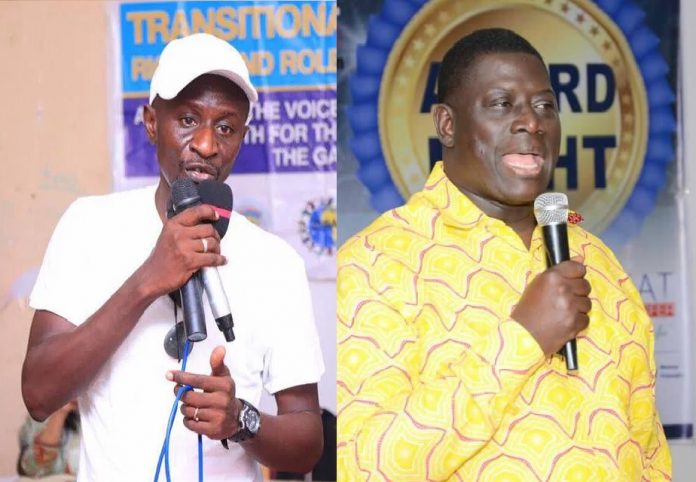 Gambia Centre for Victims of Human Rights Violations and the United Democratic Party have condemned the conferment of a ‘peace award’ on former president Yahya Jammeh.
The former leader was awarded Wednesday by a group calling itself Concerned Gambians Welfare Association. The movement said the award was in recognition of Jammeh’s peace efforts, notably the statesmanship he showed to give peace a chance during the political impasse in 2016.

The award generated huge public backlash with many denouncing it as a travesty given the revelations at the Truth Commission regarding the litany of wrongs Jammeh allegedly did.
Sheriff Kijera, the chairman of the Victims Centre, bashed the award-givers as “a group of APRC sympathisers”.
He said the award “is an attempt by a dying and idle party scrambling for relevance again in the country.

anch of APRC. We have always found APRC a bunch of clueless people suffering from Stockholm syndrome. They need the help of a psychiatrist because clearly, it is a group of riff-raffs leading the APRC. What do the likes of Rambo Jatta, Fabakary Tombong Jatta and Yankuba Touray have to offer this country?,” he asked.

Responding to Mr Kijera’s condemnation, the secretary general of Concerned Gambians Welfare Association, Modou Jarra, denied his group is a proxy of the APRC.
He said the essence of the award is “to build a concept of peace among” political party leaders of the country and described Jammeh as a “man of peace,” and highlighted some of his “peace efforts”.

“Jammeh could be antagonising the government like the diaspora [sic] is doing, by prevailing on his supporters to disrupt the peace, but he doesn’t want to destabilise Gambia,” Mr Jarra added.

He called on Gambians to be objective, and to give “the devil his due”. “Even a notorious criminal deserves a ‘thank you’ for saving a life,” he stated.

UDP
Meanwhile, the United Democratic Party has also condemned “in the strongest possible terms this bogus ‘peace award’ to Yahya Jammeh”.
A statement released by the party read: “For any Gambian individual, group or organisation to give an award to the most brutal dictator that the people of the Gambia have ever seen is an outrage and the gravest insult to dignity of the victims of Yahya Jammeh.

“The findings contained in the Janneh Commission Report and the ongoing revelations coming out of the TRRC about the criminal enterprises and absolute brutality of Yahya Jammeh, ranging from murder, rape, torture and disappearances sanctioned by him personally are depraved and shocking to the conscience of the nation.

“Any individual, group or organisation glossing over the serious allegations made against Yahya Jammeh in this dark chapter in the history of The Gambia or in any way shape or form tries to glorify the person of the despicable character of Yahya Jammeh is dangerous and insensitive to the trauma that Gambians lived through for 22 horrible years.

“The most disturbing thing to the UDP is the media coverage such a nefarious activity is receiving in the daily newspapers, online and social media like The Standard, The Voice and Fatu Network. UDP is urging all political parties, the Gambia Press Union, the Gambia Media Council and the Gambia Government to condemn this spurious award to Yahya Jammeh: because this may undermine the work of the TRRC and the whole reform agenda of the transition process of The Gambia from dictatorship to democracy.

“UDP particularly urges the APRC to disassociate itself from Yahya Jammeh’s alleged crimes and the adverse findings of the Janneh Commission. Otherwise the inescapable conclusion is that the APRC is condoning the alleged criminal activities of Yahya Jammeh. And that the APRC as a political party is encouraging impunity following credible allegations made against Yahya Jammeh by several individuals under oath before the TRRC.

“As of the writing of this statement the government of Ghana and several civil society organisations are campaigning to bring Jammeh to justice for the massacre of 44 Ghanaian nationals.

“Finally, the United Democratic Party urges the media fraternity, the fourth estate, to practice responsible journalism and to be sensitive to the pain and suffering of the victims of Yahya Jammeh and indeed the entire nation by not sensationalising non-stories or publishing unworthy pieces of information through the formal media platforms.”