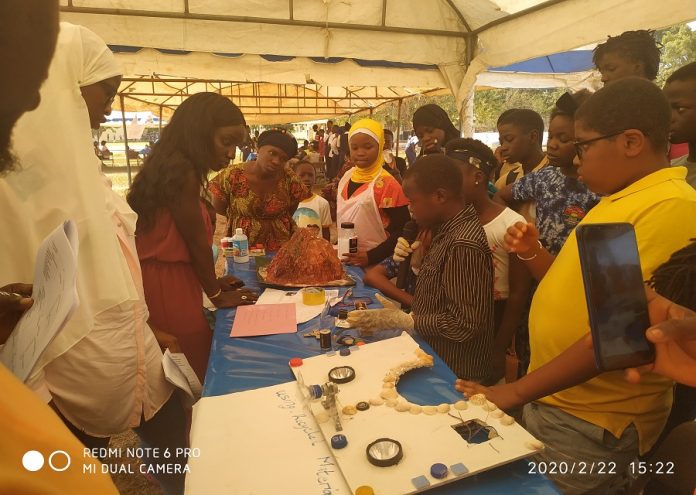 Marina International School has organised a successful Science Fair on the school grounds, on Saturday, 22nd February, 2020.
The fair is an annual event in the school’s calendar and is aimed at exposing the talents and innovative skills of students.

The Head of School, Mr. William Arthur, who is also a scientist, believes that science fair instills scientific attitude in students and enhances their realization of the interdependence of science, technology and society.

He has injected more energy into the event by creating incentives for students who emerge victorious in their exhibitions.
The Parents and Board of Governors of the school are also willing partners in support of this initiative.

Students do not only acquire relevant slicks, but are also inspired to choose careers related to sciences as they move to the next level in their academic journey .

Prior to the exhibition, students were required to choose a topic of their own interest. The Coordinator of the Science Fair Mr. Aaron M. Jabbie, a senior teacher in the school and his team suggested a range of topics for students to select from. The students were supervised by their teachers, but some parents also provided support. Students from other schools were also invited to take part in the event.

On the day of the exhibition a team of judges, carefully selected from MRC, assessed the projects based on a set criteria, which included creativity, thoroughness and clarity, to name a few.

A Robotics challenge also formed part of the events. The participants were members of the School’s Robotic club. The Robotic Hub, The Gambia which supports the students in their training during extra-curricular activities, provided judges who presided over the competition. There were four teams in the preliminary rounds, but of the teams competed in the final round and team four, represented by Abdoulie Ceesay emerged as winners, while team one represented by Isatou Demba, were runners up.

Marina International School thanks Ecobank, Gambega Gambia Ltd, Q Group, MRC, The Gambia, The Gambia Robotics Hub and parents for their support in making this year’s event a success.