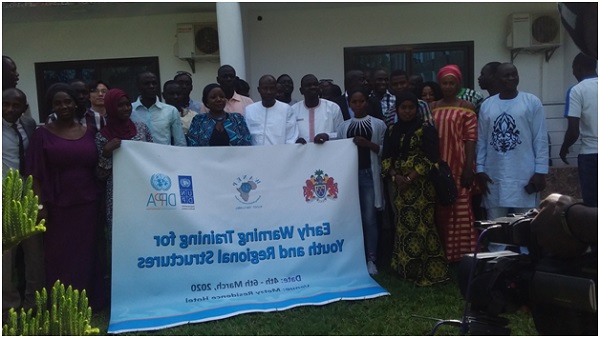 West Africa Network for Peace Building (WANEP) the Gambia together with the Office of the President, Ministry of the Interior with funding from UNDP, has kicked off 3 days training on conflict prevention.

The training targets youth and regional structures under the UNDP’s consolidating democratic governance for development in the Gambia.
The training aims to strengthen local capacities for conflict prevention by building the knowledge and skills of the participants as well as develop close collaboration with them to facilitate early response.

She said since the advent of the new dispensation, there have been critical and interacting reforms underway including the TRRC, SSR and CRC, among others.
“The country is undergoing a demographic transition with 60% of the population between the ages of 15-30. The youthful momentum poses significant challenges to be surmounted, which requires an integrated and sustained approach in the country’s transitional process,” she said.

However, Njie said the youths are also vulnerable to other negative influences. “Besides, young people are highly influenced and particularly vulnerable to political, ethnic and religious manipulation”.

She said a three-year assessment of security risk challenges highlights a significant trend of violent protests and demonstrations.

According to her, therefore, the consolidation of grassroots peacebuilding to reinforce progress towards peace and democratic governance requires a robust early warning system and the UNSCR 2250 recognizes the important role of young people in conflict prevention and peacebuilding.

“A closer collaboration with youth and grassroots structures could help to give great attention and consideration to short and long-term causes of conflict. This includes the involvement of youth as agents who can promote constructive dispute resolution and relationships, social cohesion and community relations,” she added.

She said the absence of penetrative power of the state to reach remote communities that are at risk of both man-made and natural catastrophe and it requires building assets and structures on which a peaceful society can be built to satisfy the underlying needs of the people.

Alhagie Nyagado, director general, strategic policy and planning, Office of the President, said in any society where there is no justice, there cannot be peace.
He said the training aims to create more space for WANEP the Gambia to have additional sources of early warning information.