Your Domoda maybe a poison 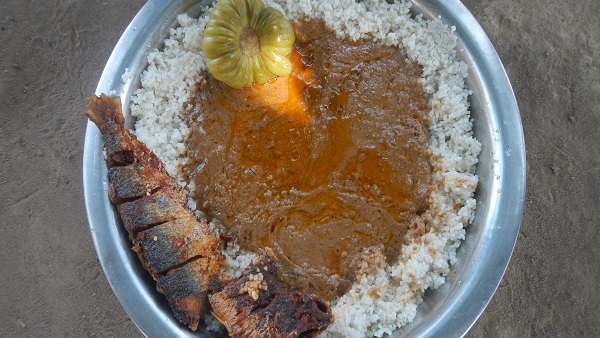 As a Gambian you will feel heartbroken when told to stop eating Domoda, Mbahal and Churai Gerteh. These dishes are both national dishes and loved by majority of Gambians.

The evolution of these dishes in our country has direct link with our most popular and treasured crop.

This crop has been the signature commodity of our beautiful country. Its repeatedly mentioned in political speeches, forums and almost everyone talking about our country.

If there is any country so much in love with Groundnuts and its products it is The Gambia.

Also known as peanuts, it is the main ingredient in traditional Gambian cuisine
Classified as a legume, eating groundnut has enormous health benefits.

They contain good amount of protein, vitamins, fiber and other nutrients.

Groundnuts have been the main cash-crop in the Gambia since colonial times.

Groundnut production, marketing and processing engages economically over half of our country’s inhabitants.

In other words, majority of Gambian farmers are involved in its cropping because it is both a cash crop and a food crop.

Meanwhile my readers, I hate to disappoint but I have bad news for you. Groundnut safety is no more like the glory days of your grandparents.

Probably you might have heard of the deadly Aflatoxin fungus.

Aflatoxin-producing fungi can contaminate crops in the field, at harvest, and during storage. They are a group of highly toxic and cancer-causing mycotoxins that can cause immune-suppression, impaired growth and have severely impacted food safety and quality in various countries in Africa, Asia, and South America.

Caused by Aspergillus fungus, major agricultural commodities most susceptible to it are groundnuts, maize, oilseeds etc.

Humans and animals can be affected acutely and chronically when they ingest foods contaminated by aflatoxins.

It is also possible for animals that eat contaminated feed to produce meat, eggs, and milk that are also contaminated.

Yes, you read that right.

For instance, if your poultry and livestock ate highly contaminated groundnuts, their products (meat, milk, eggs) will contain aflatoxin depending on the level of contamination.

Aflatoxins are mostly found in warm and humid regions of the world. Generally, it can grow between 28-40 degree Celsius.

Considering the climate of our country, it makes Gambian crops suitable aflatoxin hosts. As I write, The Gambia is faced with a huge aflatoxin problem

. There is evidence of high aflatoxin contamination in our groundnuts. This is one of the reasons our groundnuts cannot access EU markets.

The level of aflatoxin contamination in our groundnuts is so much that they are not suitable for poultry feed.

There were consignments of Gambian groundnuts (meant for bird feed) retuned to country due to high levels of aflatoxin.

Generally, to date, efforts by government and partners yielded little or no impact on control of aflatoxin in our groundnuts.

Each year millions of dollars are lost due to crop infestation by aflatoxin control measures.

Gambia is part of the countries with huge aflatoxin burden in terms of both health and economy.

A cross-sectional study of children in the Gambia found that 93% of the children had been exposed to some level of aflatoxin.

Liver cancer or hepatocellular carcinoma is a common disease in males in the Gambia and can be caused by chronic infection with the hepatitis B virus (HBV) (Turner et al 2000).

The study also found that children exposed to high levels of aflatoxin were at higher risk of becoming infected with HBV17.

It was reported by a Gambian doctor that he receives not less than two patients with liver cancer in advance stage.

Does this ring a bell? Moreover, a study by Dr Senghor found that Deggeh (peanut butter) sampled within kombo markets contained high amount of Aflatoxin. This is particularly very serious health concern.

Aflatoxin growth and development is enhanced largely due to poor storage facilities and lack of adequate knowledge by farmers and business people.

The fight against aflatoxin is very difficult as well as expensive.

The Gambia government and regional partners have been putting lots of efforts to combat this deadly toxin classified by WHO as a carcinogen.

If you are Gambian who loves eating domoda, Mbahal, Churai Gerteh and many other national dishes, it is better you make good choices on the peanuts you buy.

I advise you to buy from only trusted sources.

Avoid Deggeh and ground peanuts sold in our markets. Although cannot be confirmed, it is better to buy whole fresh groundnuts and process them for yourself.

Do a proper organoleptic test for other commodities including rice, maize etc.

The best option is to buy peanuts immediately after harvest then make them into Deggeh as quickly as possible.

Although they can be infected with aflatoxin before harvest, the contamination level maybe very low during this time.

I am not saying you should not eat groundnuts and their products but you should be sure of their sources.

Edrissa Baldeh has an Msc in Food science. He is currently pursuing a PhD in Animal and Food Hygiene

- Advertisement -
Share
Facebook
Twitter
Pinterest
WhatsApp
Previous articleCountry focus: The Gambia Re: the financial, economic and other ramifications of printing new currency and minting new coins
Next articleFeature: The story of the Gambian Amputee Football Team
Join The Conversation

By Madi Jobarteh  Why is the Gambia Government opening up the country without providing any tangible reason for doing so? Not that I am against...
Read more
- Advertisment -