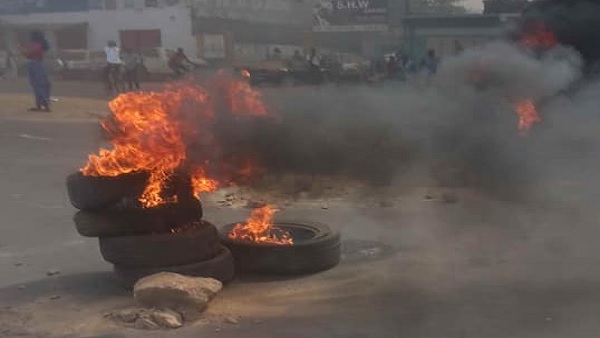 A violent demonstration rocked the streets of the Greater Banjul Area with thick smoke billowing from near the Sting Corner to the Independence Stadium junction and parts of the Westfield area yesterday afternoon.

But the protesters alleged that the police simply broke up their gathering to deter others from joining them. Pandemonium then ensured as angry protesters accused the police of provoking them with tear gas and as they retreated, they burnt tires and tree trunks on the twinned road from Mile Seven.
A similar riot broke out almost simultaneously around Westfield where protesters burnt tires and threw stones.

At Mile Seven, a protester Modou Jagne said the entire violence was provoked by the police. ”It was completely unnecessary to throw tear gas at a crowd that was gathering for a peaceful demonstration. These images are not good for the Gambia’s news reputation in the world. It is all caused by the police,” he alleged.

Another, Saul Touray said the protest was never going to be violent had the police not used force. He accused the police of still living in the Jammeh era of dictatorship.
“There has been no changes as far as the security’s mindset is concerned in The Gambia,” he said as he inhaled tear gas from rocketing canisters raining on the gardens at Mile Seven.

The Standard also saw officials of the 3YJ and civil society officials trekking the redline between the police and the burning edge of the crowd in a failed bid to calm the situation.
Hagi Suwareh, the PRO of the 3 Years Jotna said the confusion was caused by the different. According to him the police’s stance that the protest start from Y Junction instead of Sting Corner as agreed created the first misunderstanding between them and the protesters who initially thought the protest was going to start from Sting Corner to the Independence Stadium.

He added that firing of tear gas from the police fuelled the tension with protesters too throwing stones in revenge. The Standard repeatedly called the police PRO for their version but he would not pick calls.

Arrest
As we went to press last night, The Standard learnt that dozens of protesters were arrested, including Abdou Njie, chairman of the 3 Years Jotna. Another official Yankuba Draboe turned himself to the police after it was reported that he was wanted.
The police were not available to confirm any arrests. Meanwhile protesters were also admitted at the Serekunda General Hospital and treated for the effects of tear gas.