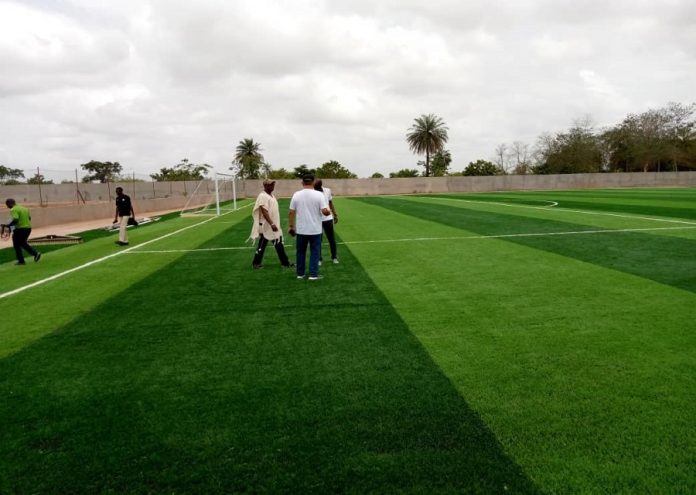 The facility, situated on a vast 11-hectare piece of land will have an hostel to accommodate 100 young children, a school with academic and skills training curriculum to cater for another non- boarding 100 students, a swimming pool, lawn tennis and basketball courts, pavilions and other sports facilities.

But the first phase of the project which involved the construction of a standard artificial and grass pitches, a VIP pavilion and offices is in advance stage.
“This has been a long term dream of ours with several initial setbacks ranging from unsuccessful land applications from government to losing money to bogus land dealers. But we are finally delighted that this place in Basori compensated for all the initial setbacks. We have a vast piece of land which we keep expanding on a fantastic location amid housing estates and a possible international catchment because this corridor leads to Senegal and even Guinea Bissau,” a delighted Bakary Jammeh said.

He said the project will cater for the productive transformation of young people to develop them into super star footballers or educated careerists in many skill professions or both. “So our approach cannot fail. The products from this academy are bound to win,” Jammeh who is also first vice president of the Gambia Football Federation said.

His colleague William Abraham revealed the project will cost a staggering 4 million euro. “So far we are footing every bill among ourselves but there are few strong partnerships expected from overseas investors who are so far very keenly following and interested in the progress made and are willing to see through the project to the second phase which would involve even bigger investment.’But the beauty and usefulness of this project will supersede whatever expenditures because it will be a unique facility that will transform our football and sports in general and bring us to standard with what obtains in other countries.

The plan is to make this place a hub for the scouting and training of football talents from across the sub region. We have very good contacts in Mali, Mauritania and Ghana in addition to Senegal and Guinea Bissau from where young talents can come to attend this academy. We have long been dreaming such a project and this initiative is a great source of inspiration towards attracting overseas investors who wanted to see real local initiative on the ground before committing their resources. This facility will provide the country with the much needed standard infrastructure it has been yearning for,”Abraham said.

The trio who are also involved in the ownership of top Gambian league club Real de Banjul said this project is an independent private venture open to all sports clubs in and outside the Gambia needing standard facility to train, learn or stay. “We are going to have top class coaches and teachers both resident and visiting staff, to come and train or teach children at this center,” Mr Abraham added. The complex is currently a beehive with the sound of hammers and generators roaring as workers tend to the almost completed VIP stand and lounge and women hoed and watered the grass pitch. But the spectacular view provided by the imposing glittering artificial pitch has already excited the locals to call the place ‘The Basori Stadium’. “This facility is already adding value to our village and we consider it as a pleasant gift to us because the name of our village shall forever be associated with its greatness,” said the village head, Alkalo Momodou L Jabang. The Alkalo is not alone in this riveting excitement for the project. Some real estate business agents peeped into the facility, snapped it and are illegally using the photo to boost their online marketing of plots in Basori.

The executive director of the National Sports Council, NSC, has told The Standard that the restrictions on public gatherings which also cover sports activities...
Read more
Sports

GFF TO GET ANOTHER D15M

The Gambia Football Federation like most other football associations in Africa continues to attract tens of millions of dalasis of financial assistance as a...
Read more
Sports