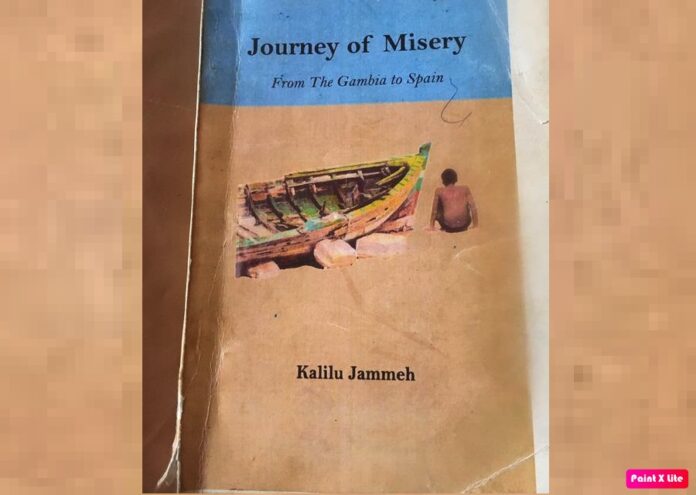 It is still hard for me to understand why young Africans would risk their lives to try to get to Europe through the ‘Backway’, considering all the hardship that they encounter and the very fact that less than 50 per cent of those who undertake the journey make it to Europe; most of them die either in the Sahara Desert or in the Mediterranean Sea.

I recently laid my hands on a book; “Journey of Misery” written by Kalilu Jammeh, a young Gambian who took the perilous journey in 2002. In this book, Jammeh gave quite a graphic account of what he went through, through Senegal, Mali, Burkina Faso, Niger, Libya, Algeria and Morocco, before finally reaching Spain. In the book, he has given us a good account of the suffering he and his companions had to endure in those countries that they passed through and how several of them brutally died on the way.

The following extract (pages 26, 27) is what happened on the first leg of their journey from Bamako (Mali) to Niger, through Burkina Faso:

“A total of 75 illegal immigrants set out for Niamey (Niger) in a van with a capacity of only 24 passengers. Our luggage was tied up on the roof. The temperature was very high and humidity was intolerable. Complaints soon started. It would be impossible to travel under those conditions for four long days. After a short while, people started to get angry. We suggested that the driver should stop the vehicle and get some air, but our request was turned down. Panic set in and four people jumped out of the moving vehicle’s window. We never got to know what happened to our companions; we could only imagine.

“A large group of travelers, mostly women, kept on shrieking, due to lack of space and suffocation. Again, we begged the driver to stop, but instead of slowing down, he increased the speed. The loud noise on his radio drowned our desperate cries. More people decided to desperately risk their lives and jump out of the window. Suddenly, the driver sharply stopped the van.

“Outside, my companions and I inhaled the air we so greatly needed and we took the opportunity to stretch our arms and legs. We then decided to face the driver. I shouted at him, “Was it such an effort to stop the vehicle for a moment?” his only response was to draw a gun and yell, “Shut up, all of you”. I honestly would have preferred to die than witness such a scene of inhumanity. Some of us decided to go in search of the people who had jumped out of the window. I found two of them, both lifeless; one girl had unfortunately fallen on a tree, which perforated her stomach. We tried to remove the branch but it was too late. We covered the breathless bodies with their clothes. Before heading back to the vehicle, the driver instructed us to hide the corpses in the weeds, away from the road, so that no one could follow our trail. After we had done the job, he asked us to wash the blood off our hands and clothes just in case the police stopped us.”

Below is another extract from the book (page 35) in which Jammeh narrates how at a point in the desert in Niger their vehicle broke down and they had to walk on foot, led by the drivers of the broken vehicle:

“We started to walk across the country around 11pm.I was in a group with two men from Nigeria, with the girl with the baby and the two drivers. After several hours, the girl, who carried the baby on her back, wailed that she could not continue. She had lost her boyfriend in the fight and she did not know where her pregnant friend was. We were also exhausted with empty stomachs and badly in need of water. Dehydration affected us physically and mentally. However, the drivers did not want to take a break or stop to rest even for a second. In a fit of panic, the girl smashed the baby on to the ground. She knew the child would not survive much longer and having to carry the weight along would mean her death sentence too. The poor creature never stopped crying and wailing. I think that we all felt some remorse for not helping her, but we did not know what to do. We had to think of our own lives as only the fittest would survive. There was no alternative but to keep on walking.”

In the following extract (on pages 38, 39), Jammeh narrates their ordeal in the desert when they were attacked by bandits who beat them and took all their money and possessions:

“…we were separated, men and women apart. Pockets of shirts and trousers were emptied and clothes torn off. The bandits threw all the rags on the floor as they were only interested in the money. Some of the travelers had hidden their savings in the soles of their shoes but that was quickly discovered. When interrogated, I repeated time after time that I had no money left but they did not stop demanding; “Where is it, where is it?”. One of the thieves brutally hit my head with his rifle. I lost consciousness for several minutes until I could get up again, totally bewildered. I quickly recovered myself and knew that if I didn’t confess where the money was hidden, they would kill me on the spot. We were forced to lie face downwards on the floor. The bandits repeatedly kicked us, which was incredibly painful as they had a piece of iron attached to the front of their shoes. When it was my turn, one of them asked my name. The answer seemingly surprised him as his father had the same name, “Kalilu”. He ordered me to stand up. Another man pointed his rifle at me while offering me a seat. I sat down and saw how they interrogated the girls. The young woman from Eritrea, who had swallowed her money, started crying and repeatedly screamed that she had no cash. Because she was not able to pay, she was savagely raped in front of us all. Once the gang member was satisfied, he took a knife and slashed her stomach. I had never seen such a brutal and horrific act. If I still had some strength or energy left at that moment, I used to pray to the one above. The poor thing quickly died and the criminals removed the coins and notes from her entrails.

“Immediately after this deplorable event, all the women handed over their change without hesitation and were then guided into a cave. We had to wait outside. At no moment were we allowed to dress as they thought we would not have the guts to run off stark naked.

“During the rest of the night, the outlaws devoted themselves to beating us and looking for more cash. Furthermore, the women were sexually abused by the gangsters. From outside the cave, we could hear their pleas and cries.”

The book was first published in 2011 by Fulladu Publishers and reprinted in 2013.

Alahagie Baa Musa Trawally Eye witness I woke up to a very wet and sombre early morning of July 31st, 1981. Like I would usually...
Read more
- Advertisment -