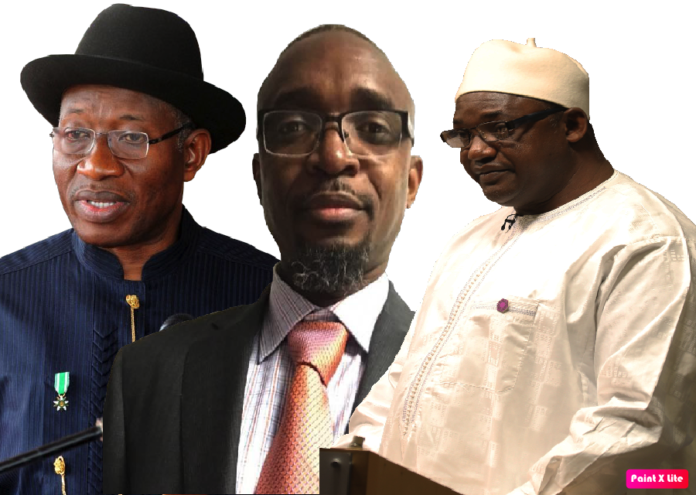 A social and political commentator, Pa Samba Jaw, has described the current trip to Nigeria by Gambian political leaders and CSOs for constitution talks as disappointing and insulting to Gambia’s sovereignty.

About half dozen party leaders are currently attending the talks in Abuja designed to reach an agreement on key areas of the Gambia’s draft constitution which was defeated in the National Assembly last year. The Gambia government, which was accused of masterminding the failure in the assembly, is keen to push it through with some amendments but the opposition are hell bent on maintaining the retroactive clause on the term-limit of the president. The negotiations, brokered by former Nigerian president Goodluck Jonathan, started in Banjul since November and is expected to be completed in Abuja this week.

However, Pa Samba, who is also a member of PDOIS, which opposed the talks said: “The trip to Nigeria is an unnecessary futile process which demonstrates lack of seriousness. The Barrow government through their supporters in the National Assembly aborted the draft constitution, precisely because of one primary issue, the retroactive application of the term limit. For that same government to now engage in this self-serving exercise of mediation is both insulting and disconcerting. What is however more disappointing is to see some of the political leaders falling for this blatant waste of time and charade.”

He argued that the only institution capable of reviving this document is the National Assembly.

“If only President Barrow and his supporters were interested in an all-encompassing constitution, they wouldn’t have aborted the process without giving it a chance to go to the committee stage where horse trading could have taken place with the goal of coming to a consensus. Sadly, Barrow and his ilk are interested in a self-serving constitution and not one that benefits all and sundry,” Jaw said.

He added: “Isn’t it ironic that the same people who had a problem with what they deemed ‘foreign interference’ in our constitution building are now resorting to foreign mediation.”

Meanwhile Lamin Keita, a PhD political science candidate, added his voice to the debate. He said: “As a nation-state, we must unapologetically and unreservedly learn to be independent in resolving our national interest at any cost. The visit of our politicians and CSOs to Nigeria to meet Jonathan to discuss the way forward for the draft constitution is puzzling. Logically, is this adventure by our political elites necessary?”

Keita, who is based in Belgium, said the visit portrays a ploy by the government to score a political point than a pragmatic approach, which requires an expedited and straightforward action to resolve this predicament. “At no uncertain time would I take a journey to Nigeria to discuss the draft Constitution’s failure brought about by our drafters and the national legislature,” Keita said.

He said the politicians’ trip to Nigeria also proves critics right that “our political elites sometimes lack the foresight to resolve our national interest internally. Instead, they quickly jump for outside solutions.”

“The ramification for outside intervention most often skews the entire process because it fails to involve the real, local actors. However, I am not saying outside intervention is irrelevant, but not in this context, space, and time. Again, I believe that the trip to Nigeria is unnecessary and it may contravene the positions of real actors. It seemingly appears that our political elites are going back to the same flawed drawing board since the beginning of the draft constitution,” he said.

The draft Constitution’s failure, Keita argued, is not a political impasse that may precipitate looming political violence in terms of war.

“Why travel to Nigeria? For what? This is just like our political elites telling Gambians they ‘shot the Sheriff but did not shoot the deputy,’ implying that they have killed the draft constitution under the political mantra of self-defense in which they want to protect their political interest and that of the Gambians,” he added.

“First, let our political elites swallow their pride and be man enough for the Gambia’s interest and for the interest of their sons and daughters—to jointly convene an immediate meeting with all the local stakeholders that involve constitutional experts in the country—to remove the wheat from the chaff. This will offer an opportunity to discuss and assess errors and readdress fundamental flaws in the draft Constitution. Then send the draft back to the National Assembly for discussion and endorsement,” he advised.