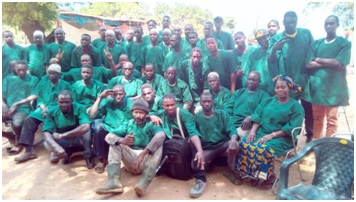 The managing director of Abuko Abattoir has said that the slaughter house is “over populated” with butchers.
He said the abattoir was designed for only ten butchers, “but now we have up to 70 butchers a day who are slaughtering over 80 animals a day.”
Speaking to The Standard, Kebba Tumani Sanneh said that is the “big challenge” the abbatoir is faced with.

Sanneh also said since its establishment in 1978, the abattoir has never been rehabilitated.
“When I came in as a manager, I confronted people, and wrote proposals for rehabilitation of the abattoir which is almost under consideration by the Government,” he said.
Speaking earlier on the objective of the butchers association, which was formed recently, Sanneh said the goal is to identity ‘the real butchers’ and ensure the smooth running of the abattoir.

“Having this butchers association committee formed is very important,” he said, “because customers will easily recognise butchers when they come into the abattoir with their animals.”

He urged Gambians to look out for men in green uniforms whenever they visit the abattoir.
“…Because those are the true butchers, not the others.”
Ebrima Jallow, the president of National Livestock Owners Association, (NaLOA) also advised customers to avoid dealing with the “wrong dealers.”