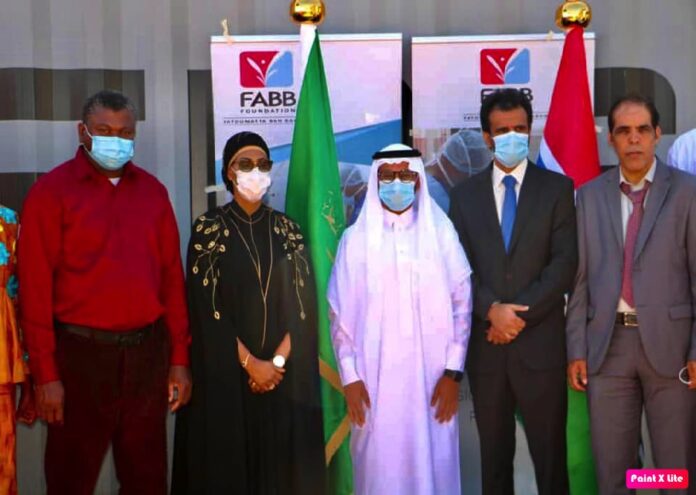 The materials were further presented to the Ministry of Health of The Gambia by Her Excellency Mrs Fatoumata Bah-Barrow and her Foundation on the 8th January, 2021.

In her statement, the First Lady thanked Al-Balsam Care & Cure and King Salman humanitarian foundation through the Consul of Saudi Arabia in Dakar, Bander Alfaifi, who represented the donors for their support to the republic of The Gambia.

She further spoke about the bilateral ties between Al-Balsam and FaBB, confirming that the latest donation is the second such assistance extended to the Gambia through her foundation.

The Consul General of Saudi Arabia, Mr Bander Alfaifi said he was very delighted to represent Al-balsam Care & Cure and the King Salman Humanitarian Foundation who donated the items to FaBB.

In his vote of thanks, the Honourable Minister of Health Dr. Ahmadou Lamin Samateh, thanked the First Lady and her Foundation for their continuous support to his ministry and the various donations and support given to especially Edward Francis Small Teaching Hospital.

He also assured Her Excellency of the judicious use of these items as intended by the donors.

Madam Fatou Ceesay, the acting CEO and Vice Chairperson, the FaBB Board of Directors/Trustees praised the relations between Al-Balsam, the King Salman Foundation of Saudi Arabia and FaBB.

She thanked His Royal Highness King Salman and family and the entire friendly people of Saudi Arabia for this great benevolence and prayed for them for good health and long life. She assured the delegation representative that these materials were highly needed and will be put to the best use.

The event was chaired by Mr Sanjally Trawalleh, Deputy Director, Health promotion and communication Directorate (MoH) and was attended by staff of the Ministry of Health, members of FaBB among other senior officials.